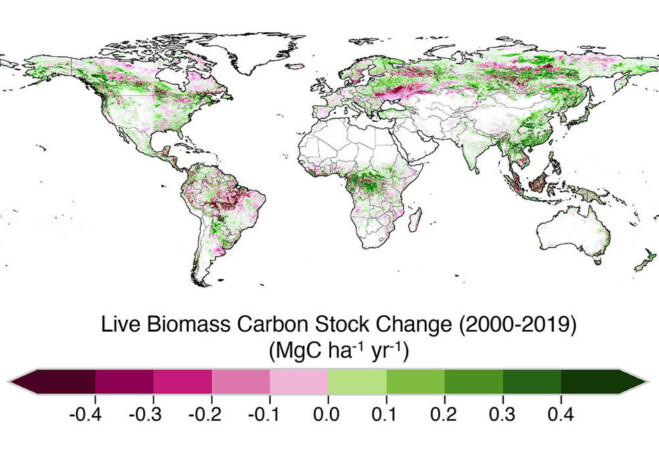 Earth’s trees and plants pull vast amounts of carbon dioxide out of the atmosphere during photosynthesis, incorporating some of that carbon into structures such as wood. Areas that absorb more carbon than they emit are called carbon sinks. But plants can also emit the greenhouse gas during processes like respiration, when dead plants decay or during combustion in the case of fires. Researchers are particularly interested in whether—and how—plants at the scale of an ecosystem such as a forest act as sources or sinks in an increasingly warming world.

A recent study led by scientists at NASA’s Jet Propulsion Laboratory in Southern California identified whether vegetated areas such s forests and savannas around the world were carbon sources or sinks every year from 2000 to 2019. The research found that during the course of those two decades, living woody plants were responsible for more than 80 percent of the sources and sinks on land, with soil, leaf litter and decaying organic matter making up the rest. But they also saw that vegetation retained a far smaller fraction of the carbon than scientists originally thought.

In addition, researchers found that the total amount of carbon emitted and absorbed in the tropics was four times larger than in temperate regions and boreal areas (the northernmost forests) combined, but that the ability of tropical forests to absorb massive amounts of carbon has waned in recent years. The decline in this ability is because of large-scale deforestation, habitat degradation and climate-change effects, such as more-frequent droughts and fires. In fact, the study, published in Science Advances, showed that 90 percent of the carbon that forests around the world absorb from the atmosphere is offset by the amount of carbon released by such disturbances as deforestation and droughts.

The scientists created maps of carbon sources and sinks from land-use changes such as deforestation, habitat degradation and forest planting as well as forest growth. They did so by analyzing data on global vegetation collected from space using instruments such as NASA’s Geoscience Laser Altimeter System (GLAS) on board ICESat and the agency’s Moderate Resolution Imaging Spectroradiometer (MODIS) aboard the Terra and Aqua satellites, respectively. The analysis used a machine-learning algorithm that the researchers first trained using vegetation data gathered on the ground and in the air using laser-scanning instruments.