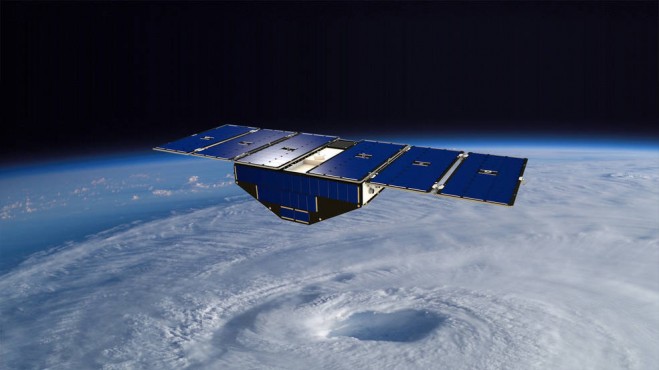 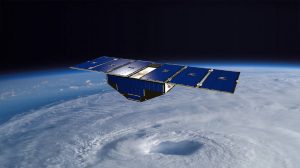 An illustration of one of the eight CYGNSS satellites in orbit above a hurricane. (Credit: NASA)

Eight briefcase-size satellites flying in a row may be key to improving forecasts of a hurricane’s wind speed—detecting whether it will make landfall as a Category 1 or a Category 5. NASA’s Cyclone Global Navigation Satellite System (CYGNSS) fleet, launched in 2016, was designed to show whether the same GPS signals your phone uses for navigation can be used to measure winds deep within a hurricane or typhoon. The answer appears to be a resounding yes.

Weather forecasting models have gotten much better at predicting the future track of a hurricane or typhoon, but they haven’t improved at predicting its maximum wind speed, which scientists call intensity. That’s because these tropical giants are steered by outside forces, such as regional winds, but their intensity depends on forces within each storm. And while many satellites can see the external winds, they can’t see through a hurricane’s thick clouds and rain.

The new CYGNSS data proved to be an excellent match with Hurricane Hunter data collected at the same time during 2017’s hurricanes Maria, Irma and Jose. The eight small satellites—orbiting with only a 12-minute gap between each one—collected more data on each storm than could be gathered during a Hurricane Hunter flight.