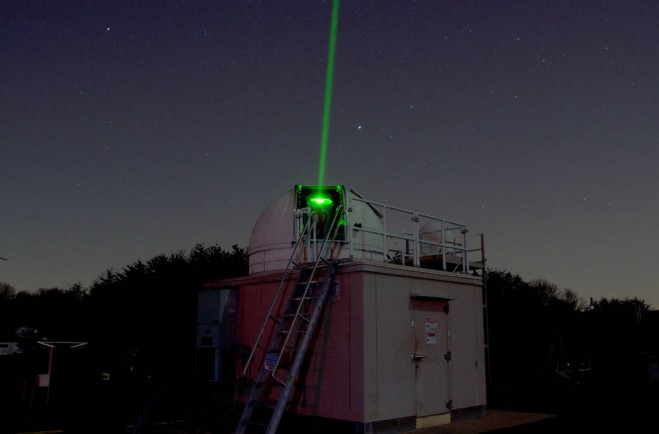 A photo shows the Next Generation Satellite Laser Ranging station at the Goddard Geophysical and Astronomical Observatory in Greenbelt, Md. NASA will build a similar laser-ranging station in Norway, with adaptations to work in the Arctic environment. (Credit: NASA)

NASA and the Norwegian Mapping Authority are partnering to develop a satellite laser-ranging station 650 miles from the North Pole that will produce high-precision locations of orbiting satellites, help track changes in ice sheets, and improve the efficiency of marine transportation and agriculture.

The Arctic station will be the latest addition to a global network of space geodetic stations that measure and monitor the size and shape of Earth, its orientation in space, the exact location of points on its surface, and how these locations change over time.

“This partnership with Norway is an important step for NASA and the scientific community in building the next generation space geodetic network,” said Benjamin Phillips, program scientist for NASA’s Space Geodesy Program. “This network provides fundamental data for satellite and spacecraft navigation, and underpins many of NASA’s Earth-observing missions and science.”

Under the new agreement signed on Aug. 7, 2017, Norway and NASA will build and install a satellite laser-ranging facility in the scientific base of Ny-Ålesund, Svalbard. NASA also will provide expert consultation on how to operate the instruments. The ground-based laser transmits ultrashort laser pulses aimed at satellites specially equipped with a retroreflector, an array of special mirrors that bounce the pulses back. The system measures the time it takes for the light to travel back to its point of origin, which is used to determine the position of the satellite with respect to the ground station with an accuracy of approximately 0.04 inches (1 millimeter).

Combined with measurements from other geodetic instruments at the Ny-Ålesund Geodetic Observatory and all over the globe, the laser ranging observations will help refine the Global Geodetic Reference Frame, the basis for setting coordinates for all locations on Earth’s surface. The reference frame is used to measure the position of objects in space with respect to the Earth as well as to precisely monitor motions of Earth’s crust, changes in sea level, and support satellite positioning technology such as GPS.