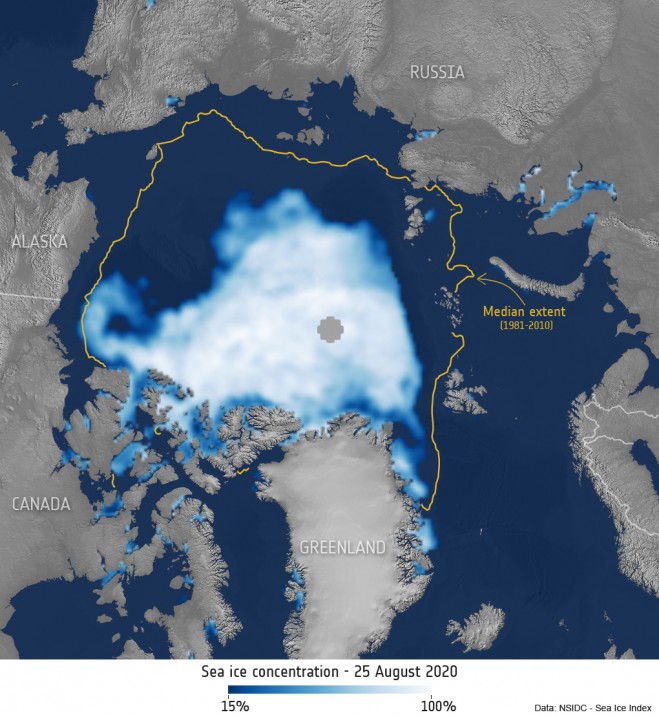 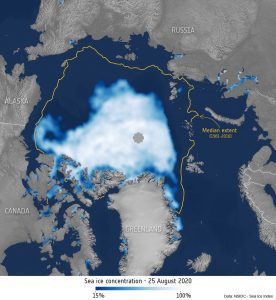 This map shows the Arctic sea ice extent on Aug. 25, 2020. The orange line shows the 1981 to 2010 median extent for that day. The gray circle in the middle indicates a lack of data. (Credit: NSIDC/processed by ESA)

During the middle of 2020, the Arctic has experienced alarmingly high temperatures, extreme wildfires and a significant loss of sea ice. Although hot summer weather is not uncommon in the Arctic, the region is warming at two to three times the global average—impacting nature and humanity on a global scale. Observations from space offer a unique opportunity to understand the changes occurring in this remote region.

According to the Copernicus Climate Change Service, July 2020 was the third-warmest July on record for the globe, with temperatures 0.5°C above the 1981-2010 average. In addition, the Northern Hemisphere saw its hottest July since records began—surpassing the previous record set in 2019.

The Arctic has not escaped the heat. On June 20, the Russian town of Verkhoyansk, which lies above the Arctic Circle, recorded a staggering 38°C. Extreme air temperatures were also recorded in northern Canada. On Aug. 11, Nunavut’s Eureka Station, located in the Canadian Arctic at 80 degrees north latitude, recorded a high of 21.9°C, the highest temperature ever recorded so far north.