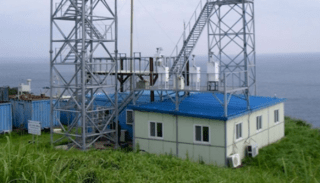 The Gosan GAW Regional Station (Global Atmosphere Watch, program of the World Meteorological Organization) is located on the south-western tip of Jeju Island (Republic of Korea), facing the East China Sea. The station rests at the top of a 72-meter cliff, about 100 kilometers south of the Korean peninsula, 500 kilometers northeast of Shanghai, China, and 250 kilometers west of Kyushu, Japan. (Credit: AGAGE)

On the heels of the first definitive signs of the ozone layer recovery in 2018, an international team of scientists discovered that production and emission of a banned, potent ozone-depleting chemical is on the rise again. A new research finding, published in Nature on May 23, locates the source region for about half of those new emissions. Since 2013, they found that an increase of about 7,000 tons per year of trichlorofluromethane (CFC-11) added to the atmosphere originates from eastern China.

Locating and identifying this particular source of CFC-11 was possible in part because of a NASA-supported monitoring network for atmospheric gases that has been in place since 1978.

CFC-11 was one of the first generation of ozone-depleting substances banned by the Montreal Protocol, an international agreement signed by 196 countries to protect the stratospheric ozone layer. The ozone layer protects life on Earth from harmful ultraviolet radiation. CFC-11 was completely phased out of production in 2010. Its reappearance in the atmosphere will likely delay the recovery of the ozone layer.

The discovery of increased CFC-11 emissions was first made by researchers in 2018 with observational data from the Mauna Loa Observatory in Hawaii, part of an ongoing activity at the National Oceanic and Atmospheric Administration (NOAA)’s Global Monitoring Division. In the United States, NASA and NOAA are charged with monitoring threats to the ozone layer under the 1990 amendment to the Clean Air Act.

From 2012 onward, they found that CFC-11 concentration levels were not decreasing as fast as expected. Using computer models and other analysis techniques that simulated wind patterns and the movements of gases throughout the world, they determined that the increase in emissions was most likely from eastern Asia. The increase in emissions also suggested new production. The question was, where exactly did it come from? The monitoring station in Hawaii was too far from other land masses to be able to narrow down the origin beyond eastern Asia.

The ozone research community turned to the Advanced Global Atmospheric Gas Experiment (AGAGE), a network of 15 monitoring stations set up around the world to measure 40 atmospheric gases that contribute to greenhouse warming and ozone depletion. The network operations are led by the Center for Global Change Science at the Massachusetts Institute of Technology. NASA funds five of these stations and provides basic infrastructure that supports the entire network, partnering with multinational environmental agencies and with station host countries of Ireland, Norway, Switzerland, Australia, Japan, and Korea. The network has produced a 40-year continuous data record of frequent measurements of some of the most difficult-to-detect trace gases in the atmosphere.

“The primary way we monitor changes in ozone is through satellite observations,” said Ken Jucks, program manager for NASA’s Upper Atmosphere Research Program at NASA Headquarters in Washington. “But it’s much harder to measure ozone-depleting substances by satellite. A few of the CFCs can be measured from space, but not to the level of accuracy you need to understand their changes over time.”

Scientists need to be able to detect concentrations and concentration changes of much less than one part per trillion of ozone-depleting gases. This can only be done effectively with instruments on the ground. To find out where these gases are coming from, the observations also need to be made relatively close to the source of the emissions. Two newer stations fit the bill for observing East Asian emissions: the South Korean Gosan AGAGE station, run by Kyungpook National University in South Korea, and the AGAGE-affiliated station on Hateruma island in Japan, run by Japan’s National Institute of Environmental Studies.

“What you see in those datasets are basically pollution events,” Jucks said. Pollution events coming from a localized source get diluted and harder to detect and trace back the farther they travel away from their origin. “As we’re getting these observations in more populated areas, we basically get a data point an hour, which is a big advantage for these types of measurements compared to whole air gas samples,” Jucks said, because that gives the modeling teams sufficient data to back-trace the gases to their source.

The data observations of CFC-11 combined with atmospheric modeling by researchers at the University of Bristol, the UK Met Office, the Swiss Federal Laboratories for Materials Science and Technology (Empa), and the Massachusetts Institute of Technology determined that the most likely source of the CFC-11 was new production from China.

When the AGAGE network was originally set up, the emphasis was on understanding the background levels of greenhouse and ozone-depleting gases and how they were transported through the atmosphere. With older stations set up farther from sources, researchers were able to get a better sense of the global concentrations and lifetimes of these gases—and how high or low those levels have gotten through time. This context is essential for monitoring current and future changes to CFC levels.

“Without the record that goes back all this time, it would be really difficult to fully understand with the modeling experiments what the CFCs have been doing,” Jucks said. “It gives us a tight constraint for the changes seen in the atmosphere over the last 40 years. Without that we wouldn’t be able to tell whether concentrations are changing as we expect them to over time.”

To learn more about this study, visit: http://www.bristol.ac.uk/news/2019/may/cfc-emissions.html