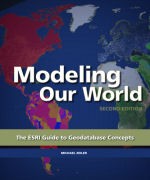 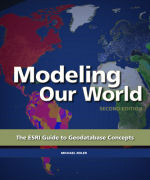 This book originally appeared in 1999 and has been updated and re-written a decade later. Geographic information system (GIS) modeling is the key to understanding GIS – and how to communicate to others about the world we live in through mapping and cartography. The information and knowledge included in ‘Modeling Our World’ is the foundation for understanding ArcGIS and geodatabase concepts. Many of the descriptions and concepts in this book apply to all GIS.
The Spatial Turn
Interdiscplinary perspectives
Edited by Barney Warf and Santa Arias
Modeling Our World

The ESRI Guide to Geodatabase Concepts

This book originally appeared in 1999 and has been updated and re-written a decade later. Geographic information system (GIS) modeling is the key to understanding GIS – and how to communicate to others about the world we live in through mapping and cartography. The information and knowledge included in ‘Modeling Our World’ is the foundation for understanding ArcGIS and geodatabase concepts. Many of the descriptions and concepts in this book apply to all GIS.

This book contains the understanding and logic that ESRI applies toward the development of GIS. Much of the success of the company’s products lies in the pages of this book. It includes a rich understanding about coordinate systems and projections, vector modeling, linear modeling, locating places, imagery handling and modeling, surfaces, temporal data, data storage and geoprocessing. The book explains how ESRI GIS capture, manage, model and represent the real world. To understand this book is to understand basic concepts about how a geodatabase works and in doing so, to be in a position to push applications and the GIS to its limits – effectively.

The basic concept behind this book is centered around the notion of taking the real world and storing it within a database. Not just any database, but a geodatabase that is carefully developed to enable the real world phenomena to be stored and retrieved as they must truly exist. In addition, the geodatabase is designed for high performance. It can perform many transactions among a wide variety of user needs quickly, and retrieve results instantly.

In many ways, this book can be chosen as the first introductory text for understanding GIS. The chapter on projections and coordinate systems explains them exceptionally well. All the elements for understand vectors are also included such feature, attributes, behavior and their relationships. The graphics are clear and flow with the written explanations very well. Points, lines, areas, multipoints, polylines, paths, segments and others are all explained.

The construction of geodatabase tables is explained and indexing, relationship classes, feature types, linear referencing, spatial referencing and classification are also included. Often one will hear someone ask “What is a GIS?” This book can answer that question.

One of the key take home points in this book is the power of a geodatabase. They have been designed to enable much more functionality over shapefiles. For example, the use of subtypes in a feature class opens the door to much more refined behavior use, split-merge policies, connectivity, relationship, network and topology rules. Collectively this adds significantly to the ability to build high quality databases with greater functional capabilities.

While shapefiles are not defunct, they are certainly limited when it comes to a comparison with geodatabases for performing present day geospatial GIS applications which demand richer and higher performance. This book explains in detail why that greater performance is realized and, in my view, why one should be moving out of the shapefile arena and into the geodatabase.

Intersection is well explained and spatial operators are well documented in this book. Attention has been paid toward explaining not only what topology is, but how it works. Explained are both geodatabase topology as well as map topology.

Linear networks are discussed. The book not only explains what these are, but also provides examples where different networks employ this feature such as river networks, utility networks and transportation networks.

The section on graph theory is an interesting part of this book. Developed as a mathematical branch for analyzing networks, graph theory originated with the work of Swiss mathematician Leonhard Euler who in 1736 published the first results for the citizens of Konigsberg in the former East Prussia. The book discusses graph elements, properties of graphs, geometric networks and network datasets. It details how different kinds of road networks and flow problems are realized and solutions developed.

A detailed explanation of addresses and address systems for locations is outlined. One can learn how to build refence data systems, composite address locators, geocoding and applications for crime mapping, voting precincts, regulatory compliance and public works department applications.

A complete section includes information for working with rasters. Did you know that raster images can be stored in one of four ways? These include mosaic dataset, raster dataset, raster catalog or a raster column in a feature class. Image data sources are discussed and display methods are shown.

Readers can learn about triangulated irregular networks (TIN) and how this model is applied to create continuous surfaces for building digital terrain models (DTM). The book explains terms like hard and soft surface feature types, polygon feature classes, line feature classes and point feature classes for use in terrain datasets.

Time Sliders are presented toward the end of the book. This section includes information about storing temporal data and presenting it. Versioning and working with multi-user databases is also included. Finally, issues related to geoprocessing and model building through ModelBuilder are also included.

If you read this book, absorb and understand it, you will become a very effective geographic information system (GIS) user and developer. In my view, if there is one book necessary for understanding GIS well, it is this book. Everything about GIS flows from data modeling. If one does not understand how transport systems work, rivers flow over 3D space, addressing works and imagery from aerial sources connects to real places on the ground, then it is near impossible to build a useful GIS.

People often ask me how and why ESRI has become so successful in the GIS business. I usually answer along the lines because of data modeling – what is included in this book. If the data model of the software cannot store and re-create the real world in a logical and consistent way that people can work with it and understand it, then it cannot become successful. Clearly, this book shows that consideration has been given to storing real world representations in logical and useful approaches that allow people to explore, analyze, geoprocess and visualize to solve world wide problems.

Modeling Our World is required reading. It contains important material that is useful to anyone working with any GIS – moreso for ArcGIS with the geodatabase. This is dry reading in a sense to non-GIS people, but the graphics and easy-to-understand writing go a long way toward pulling readers into the content, helping them to understand and to keep them interested. The graphics are well done. This book rates about 9.5 out of 10. Well presented.

Jeff Thurston is co-founder and co-editor of V1 Magazine / Asian Surveying and Mapping for Vector1 Media. He is based in Berlin, Germany.