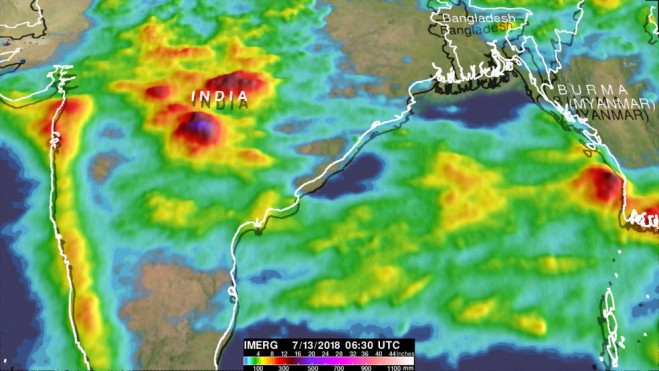 The IMERG analysis showed rainfall accumulation during the week from July 9-13, 2018, when most of India’s heavy monsoon rainfall remained nearly stationary or increased in size while the area of Bangladesh’s heavy rainfall shrank. (Credit: NASA/JAXA, Hal Pierce)

India’s southwest monsoon normally occurs between June and September and is known for being a summertime rainy season. This year’s monsoon has been assessed as average, but India’s Meteorological Department statistics show that daily mean rainfall for the country has recently been above normal. At least 15 people were killed by floods and landslides in India on July 11, 2018. So far this year, close to 200 deaths may have resulted from India’s heavy monsoon rainfall.

Algorithms developed by NASA’s Precipitation Measurement Missions (PMM) science team at Goddard were used to merge data from satellites in the GPM Constellation. The data showed heavy monsoon rainfall along India’s Arabian Sea Coast and large areas of north-central India. During this period, at least 525 millimeters (20.7 inches) of rain were reported in Mumbai, India.