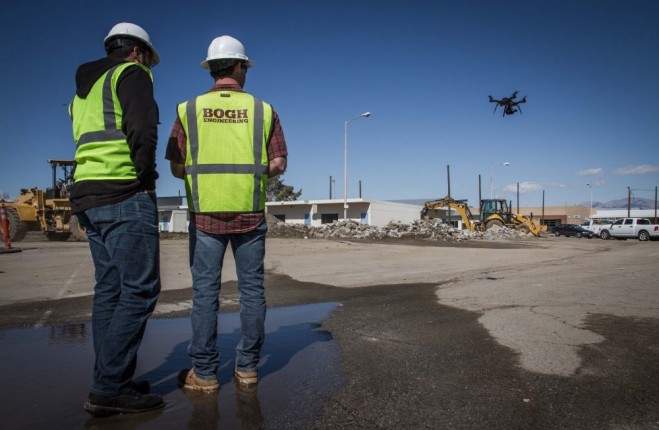 Headquartered in Beaumont, California, Bogh Engineering is a 3rd generation family owned construction and engineering company with 65 employees. It focuses on construction of public schools, and is currently working on 14 job sites including building the 1.4 million square foot Indio High School. “90% of our business is focused on schools because we understand the business, the bureaucratic complications, and we can work directly with the client”, said Mark Bogh, owner and 30 year industry veteran.

Bogh Engineering’s core capability is pouring concrete, from flooring to vertical structures. The company also covers other activities to prepare a site for concrete construction: surveying, demolition, and site grading. Site surveying is a recurring process and happens before and after every other major activity. Bogh Engineering also surveys the site before it takes over work from other subcontractors [Image 1]. Survey data makes sure work starts as agreed in the contract, and is completed according to plan.

Bogh Engineering employs its own survey crew that drives to each site and performs a topographic survey with traditional equipment. A survey of a school site usually takes 1 to 2 days of work for a one-man survey crew. “We needed a solution that helps us quickly and frequently run surveys. This was the initial trigger that made us look for a system like Site Scan,” Mark said.

One of the largest projects Bogh Engineering is currently working on is the demolition and rebuild of Indio High School in Indio, CA. Work started in February 2013 and is now in the fifth and final phase. Before and after working on grading the site, the Bogh Engineering team surveys the site and uses the surveying data to perform a cut-and-fill analysis with Civil 3D. Damian Garcia, staff engineer at Bogh explained us his workflow:

This view allows the team to have the complete picture on the work that needs to be done at the beginning of the project, or at the end, to check that the work has been completed as planned.

To estimate how much dirt needs to be moved the team performs a cut-and-fill analysis. The surveyor spent two days on site and measured 324 points in total. Post-processing the data by a civil engineer in the office in Civil 3D took another day [Image 3].

Today, Bogh Engineering uses Site Scan to do surveying work. Flying the Site Scan drone on the 17 acre site of Indio High School and collect all the data only takes 30 minutes. During the two flights, Site Scan captured 410 images. These images were then processed in Site Scan Manager into an orthomosaic and a 3D point cloud in about 3 hours.

The whole operation, from collecting the data with Site Scan and processing the images into 3D point clouds, took just half a day. This represents a 4X increase in productivity on this specific site compared to traditional topographic surveying [Image 5].

“Now, it only takes me two days instead of weeks to survey all my 14 active construction sites with Site Scan”. Mark Bogh

In addition to flying the sites for bidding and checking its own work, Bogh Engineering started flying Site Scan to collect a comprehensive as-built picture of sites for documentation. Multiple companies are working on the same site together with Bogh Engineering and disputes between the different subcontractors happen all the time [Image 7].

This pushes Bogh Engineering to survey a site when they take over work from another subcontractors to ensure that work has been completed according to the plan. This is important to avoid expenses that are beyond the scope of Bogh’s contract.

Mark believes that having all important records accessible online saves the company time and money. Now, all records from sites are kept in 3DR’s cloud-based platform, Site Scan Manager. Employees with the proper permission levels can access the weekly orthomosaic views, images, and flight information. “If anything ever comes up, it’s a simple click to find month-old documentation of the site.” so Mark “Especially orthomosaic views can help reconstruct an event and recognize what work has been done and when”.

“I spent the whole last week in court because of disputes with other subcontractors. Documenting the site would have saved me that.” Mark Bogh

He also describes a previous project in Perris, CA where disputes between graders and the concrete contractor on whose data is correct dragged him to court. The other subcontractor’s work was off by 15,000 cubic yards. The correct data saved Mark $160,000 on one project.

Given the success they had in the first two months of using Site Scan, Mark and his team want to increase the frequency and fly every site once a week to collect data for documentation.

“I want to have a site view for documentation from every site once a week.” Mark Bogh

Weekly orthomosaics from the sites will allow the team to have the necessary data to better communicate with other subcontractors and have proof in case of disputes. “The biggest advantage of all is that now we can prevent these unpleasant situations from even happening. Having views of the site does not only allow my team to react proactively and warn other subcontractors that errors have been made, but it also speeds up collaboration with them” so Mark.

Mark said that he has already recommended Site Scan to other construction companies in the Beaumont region. He believes that instead of trying to sell someone on the product, all that is necessary is to educate people about what Site Scan is capable of. “I’ve showed other contractors the data collected with Site Scan and how easy it is to implement into what they do every day. Every small engineering firm should own one.”

Looking for a drone solution for your next project? Learn more about 3DR Site Scan, the complete drone to data platform. Want to speak to someone directly? Contact us to connect with a specialist.