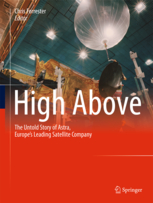 Luxembourg based AES Astra emerged in the 1980’s during a critical time when television was expanding and re-inventing itself as a powerful communication medium, and satellite television was new. The growth of Astra was aligned with the development of global perspectives on many fronts. Global collaboration, worldwide news, high definition television along with mobile viewing would all follow, built upon the capabilities of advanced communication satellites.

The development of satellite-based television followed after the ‘golden era’ of television, that previously occurred during the 1950’s to 1960’s.  AES Astra appeared on the scene in the early 1980’s with the goal of expanding communications and transmission of television reception. It rapidly enabled reception around the globe and created the opportunity for larger audiences. As this book points out, when it comes to television reception – “height means everything.”

Astra’s fleet of satellites are much higher in planetary orbit, as compared to imaging satellites used for remote sensing applications. Astra says, “the satellites are 110,000 Eiffel Towers in space” – a distance equating to 36,000 kilometers. For users, often unaware of the technology involved in getting a satellite signal within their homes or businesses, the process is seamless. However, modern LNB’s that channel signals to receivers often amplify the satellite signal 1,000,000 times and can discern horiyontal from vertical signals.

It was famed science fiction author Arthur C. Clarke, who in 1945 began writing about a world where satellites would encircle the planet and transmit signals resulting in a wider inter-connection. This was expressed in a letter to ‘Wireless-World’ magazine in the UK at that time. Clarke was later rewarded with British Knighthood in 1998, largely due to his thoughts.

“In 1975,  Stephen Birkill became the first person to receive satellite TV programmes from a home dish. Birkill astounded the world by watching the SITE educational programmes to rural India over NASA’s ATS-6 satellite, at his home in Sheffield, England,” the book indicates. The work of American ‘backyard inventor’ Bob Cooper is detailed, along with his connections to the development of satellite televsion (only Cooper and Ted Turner hold FCC licenses for private home satellite TV).

The right to exploit the satellite spectrum has been something that Luembourg explored as far back as the 1930’s while other nations sought to create publicly funded radio stations.  A chain of events would lead to the development of Europe’s largest broadcaster RTL Group and the book provides the details of the events.

Forrester includes a number of details and historical information that describe the then evoling European satellite communications industry, it’s players and the considerations involved in licensed and pursuing advanced research and applications across Europe to end-users.

Vivid descriptions are included about the relationships between business people involved in funding, licensing and developing European communications during the 1980’s. SES would emerge as a respected company, capable of launching and operating satellites independently. This opened the door to northern and southern markets around the world, effectively meaning broadcasters could not begin to think of expanded services.

From Luxsat to Coronet to Sky News and News Corporation, the author fills in the details of the relationships between satellite financial backers, news companies expecting to use the services and some of the amazing inventions that enabled Astra 1A to initially launch. While Eutelsat continued to oppose the efforts of AES, both British and German governments would become involved, and act to reduce this opposition.

It is somewhat interesting to learn that the estimated number of satellite-based users across Europe was estimated to be around 113,000 at the beginning. Later, the shift from national broadcasting to a lively and competitive marketplace of privately based channels would emerge. Cracking the German television market, in particular, SAT.1 station moving on to Astra, was viewed as the door opening to this major change.

The book describes the evolution of space technology and the dveelopments that enabled television to gain momentum through satellite-based technology. Saturn-V technology is explained, NASA’s efforts into spac are documented with respect to satellite-based communications.

The future of television is explained, particularly those aspects dealing with desktop boxes in the home and how high definition television, 3D and other technologies are expected to development in the future.

In summary, this is an enjoyable read with many facts that describe the history behind the rise in satellite-based communications for television. I admit to choosing this book for a review because the evolution it explains and details runs very close to the evolution of geospatial technologies, also based on satellite technologies, private-public relationships and the emergence of manufacturing industries and technologies that support their development.

High Above: The Untold Story of Astra – Europe’s Leading Satellite Company is a definitive story about how the satellite television industry came into being. From it’s orgins in science fiction writing to the finesse and expert system developments emanating from Luxembourg, this book contains a wealth of facts and information that describe technological leadership, political adeptness and sheer luck to arrive in a leadership position that changed the world.