With deforestation accounting for 10% of greenhouse gas emissions, satellite observations have an important role to play in mapping this changing ecosystem. ESA is therefore going to great lengths to make sure a new sensor will live up to its promise.

Deforestation and forest degradation release about the same amount of greenhouse gases into the atmosphere as all the road traffic across the globe.

Initiatives such as the REDD+ Reducing Emissions from Deforestation and Forest Degradation programme were highlighted at the recent COP21 climate conference in Paris, bringing forests back into focus.

The initiative offers incentives for developing countries to reduce emissions from forested lands and invest in low-carbon paths to sustainable development. 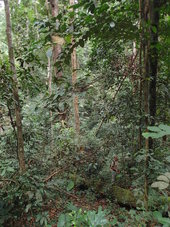 While mapping forests and their properties from space pose a huge technical challenge, space agencies are eager to develop novel sensors that allow forests to be mapped in detail.

As such, ESA is building the Biomass mission to determine the amount of biomass and carbon stored in forests.

To make sure the satellite’s radar will deliver on its promise, the novel measuring technique is being tested from aircraft over a wide range of forest types and conditions.

The latest campaign, AfriSAR, brought Gabon under the radar spotlight. Forests cover 80% of the country, making is home to some of Africa’s most diverse rainforest and a haven for wildlife, including western lowland gorillas and forest elephants.

Carrying on from an earlier campaign in July 2015 during the dry season, this recent effort captured the onset of the rainy season.

The knowledge from this second leg is essential to understand how different moisture and climatic conditions will affect measurements from the satellite.

The DLR German Aerospace Center’s AfriSAR field team leader, Ralf Horn, said, “Everything went smoothly and the radar measurements are of excellent quality. The biggest challenge we faced was the weather, but most of the rain fell during the night and we were able to fly above the clouds.”

To help interpret the airborne data, a team from University College London and the French Cesbio institute once again made measurements and set up ground plots in the Lope National Park – a lush forest run by the Gabonese Agency of National Parks, ANPN.

NASA has also joined AfriSAR, bringing in two planes that carried an additional radar instrument and an optical equivalent, lidar, which they are using to support their NISAR and GEDI missions. The combined airborne measurements are a unique source of information on African tropical forest.

Public interest was expressed by the Gabonese government during a media day at Libreville airport where the teams are stationed. ESA campaign coordinator Tânia Casal said, “Once more, the Gabonese Space Agency AGEOS and ANPN have been instrumental in the success, guiding us and helping overcome logistical challenges that we face with such a large campaign.”

Next up is the job of processing and analysing the huge amount of data. Expectations are that, in a year from now, significant contributions will have been made to advance our knowledge of the radar signals from tropical forest.