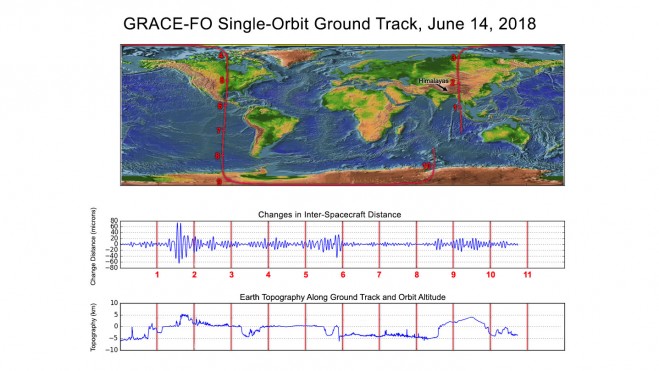 Along the satellites’ ground track (top), the inter-spacecraft distance between them changes as the mass distribution underneath (i.e., from mountains, etc.) varies. The small changes measured by the Laser Ranging Interferometer (middle) agree well with topographic features along the orbit (bottom). (Credit: NASA/JPL-Caltech/GFZ)

The laser ranging interferometer (LRI) instrument has been successfully switched on aboard the recently launched twin U.S./German Gravity Recovery and Climate Experiment Follow-On (GRACE-FO) satellites. The LRI, which is being flown as a technology demonstration, made its first measurements in parallel with GRACE-FO’s main microwave ranging instrument, and initial comparisons of the data from the two types of instruments show that they agree as expected.

“The LRI is a breakthrough for precision distance measurements in space,” said LRI Instrument Manager Kirk McKenzie of NASA’s Jet Propulsion Laboratory in Pasadena, Calif., which manages NASA’s contribution to the instrument. “It’s the first inter-spacecraft laser interferometer and the culmination of about a decade of NASA- and German-funded research and development.”

The GRACE-FO mission, launched on May 22, 2018, continues the work of the original GRACE mission of monitoring phenomena such as the melting of ice sheets and changes in groundwater levels by tracking the changing pull of gravity on the GRACE-FO satellites. The microwave ranging interferometer records these changes in gravity by measuring how they change the distance between the twin spacecraft. By accurately measuring these minute changes as the two spacecraft orbit the planet, scientists are able to calculate month-to-month variations in Earth’s gravity field. The instrument is jointly managed by JPL and the Max Planck Institute for Gravitational Physics (Albert Einstein Institute) in Hanover, Germany.