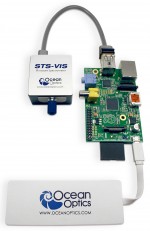 Ocean Optics has introduced a new set of spectral sensing tools for developers and others who want to deploy spectroscopy in new applications. The STS Developers Kit makes it possible to create a platform for easy, affordable, research-quality spectral measurements. The kit brings together Ocean Optics’ powerful STS spectrometer, a Raspberry Pi microcomputer, customizable software,

With service.monitor 3.3 it is now even easier to monitor services in a GIS infrastructure. The new version of this web application offers full multi-client and distribution capability and, in particular, features comprehensive support for users while they are creating monitoring jobs. It should be stressed that in this context, operating procedures have been considerably

Boundless Releases OpenGeo Suite 4.1: Enhances IT Interoperability and Ease of Use

The 5.3 version primary advantage is an apparent increasing of the data processing volume through the transition of distributed processes operations to a 64-bit platform and speedup of UAS triangulation due to the distributed computing.

Envitia is pleased to announce the release of the next generation of MapLink Pro, the most powerful and flexible version of the geospatial toolkit to date.  MapLink Pro 8.0 focuses on high performance visualization for situational awareness in both connected and disconnected worlds.  With this release, Envitia delivers on its commitment to supply continued capability