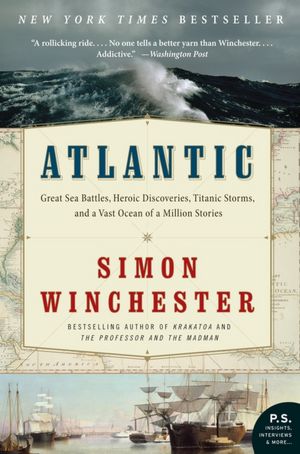 Simon Winchester writes about the Atlantic Ocean from it’s beginning as a geological event to the rich history involving explorers, scientists, cultures, geodesy, and events through time.  He describes the basalt formations of eastern Canada to similar formations in Morocco, the beginning of bathymetric mapping, and how Benjamin Franklin became the father of oceanography. Leif Eriksson appeared on North America shores long before Christopher Columbus and the tale between the two is explained. This book is a wonderful read, filled with fact and information about the continually expanding Atlantic Ocean and all things related to it.

More rivers flow into the Atlantic Ocean than either the Pacific or Indian Oceans. Included are the Thames, Congo, Mississippi, Amazon, Shannon and Rhine and many more. The HMS Challenger, a British sail ship that would later have a space shuttle named after it, plyed the Atlantic taking depth readings – the goal to not only to survey the vast Atlantic, but to learn about new species possibly living at greater depths. And while many commonly believe that it was Christopher Columbus who discovered America, the evidence (discovered in 1960) points to the Norwegiian Leif Ericksson having crossed from Iceland to Greenland to Newfoundland in 1001 A.D.

Winchester pens an intriguing and informative book, filled with facts, stories and tales about the Atlantic Ocean through history. From the moment of separation of the Pangaea and it’s single landmass to become continents. He describes how the basalt geology of Nova Scotia is directly linked to similar formations in Morocco. The numerous expeditions to first discover the West Indies, their motivations and the reasoning behind each venture to the discovery of Trade Winds and how to navigate the winds for the quickest return to Europe, this book draws readers closer to the Atlantic.

Written with a historical perspective, the author has researched the ocean and travelled to many places around the Atlantic Ocean to gather evidence, ask questions and learn of the ocean with new perspectives. The book seems to grasp  readers attention and pull them in with enticing facts and details. The size of the ocean, geodetic features, map making history, the many ships travelling it’s water, poets, explorers and scientists are all included. Benjamin Franklin as it turns out was interested in the oceans currents, mapping them and using them for commerce. As Winchester says, franklin was the Father of Oceanography.  The details of his experiences are expressed in this book.

One does not have to go back to far in history to learn how people viewed the Atlantic Ocean in mysterious ways.  For example, with deeper ocean currents, it was assumed that the ocean became thick and more solid below it’s surface. That sunken ships would never touch bottom, only floating endlessly in a thick morass of watery solids. And the most common belief of the past being that one would simply fall off the planet at the edge.

While the Romans appeared uninterested in the oceans as the author states, the Vikings and others saw the oceans with exploratory fascination, wandering out into them with ships that would be lucky to survive and return. The efforts of James Rennell, a British ocean explorer, who’s name is now embossed on the British Oceanography Centre in Southampton is described, as are the marine expeditions of Matthew Fontaine Maury.

The Scripps in California began in 1892, while the Woods Hole institution was initiated in 1930 – both to study the world’s oceans. The International Hydrographic Bureau was started by Prince Albert I of Monaco, where it exists to this day. The author describes how that came about and some of the history behind the occasion.

This book grips readers attention and pulls them into the facts, tales, history, stories and evolution of the Atlantic Ocean from both a physical and people perspective. Map makers, geodecists, navigators, explorers and those interested in history will truly enjoy this book for it’s style of writing, but also the factual details that often seem unknown or rarely exposed to date. The book describes the Atlantic Ocean and draws readers into it’s living and changing existence – a well written book any reader would likely find special.