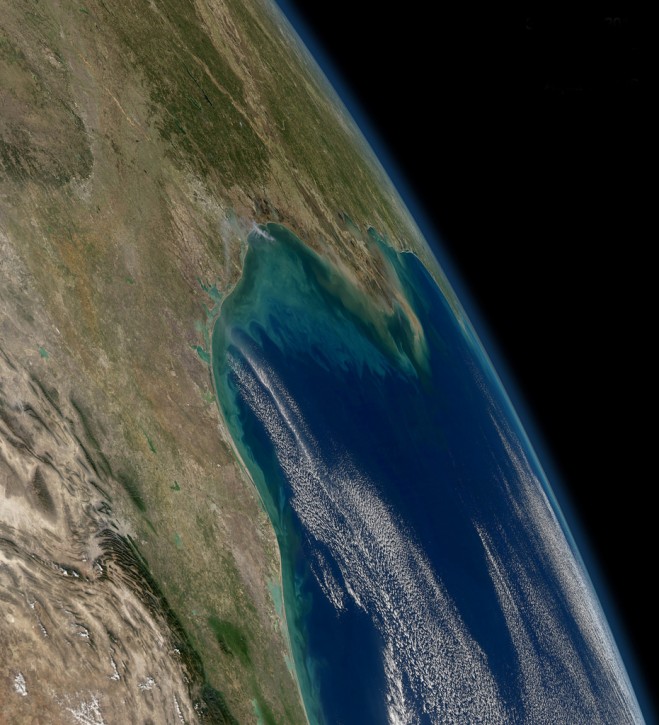 Oxygen-depleted “dead zones” often form in the northern Gulf of Mexico due to nutrient-rich runoff from the Mississippi and Atchafalaya rivers, which are seen here as tan and greenish-brown plumes visible from the International Space Station in 2012. Nutrient-rich volcanic ash may have fed similar dead zones that produced shale oil and gas fields from Texas to Montana. (Photo courtesy of NASA/GSFC/Aqua MODIS)

Nutrient-rich ash from an enormous flare-up of volcanic eruptions toward the end of the dinosaurs’ reign kicked off a chain of events that led to the formation of shale gas and oil fields from Texas to Montana, according to a new study by Rice University geologists that appears in Nature Publishing’s online journal Scientific Reports.

“One of the things about these shale deposits is they occur in certain periods in Earth’s history, and one of those is the Cretaceous time, which is around the time of the dinosaurs,” said study lead author Cin-Ty Lee, professor and chair of Rice’s Department of Earth, Environmental and Planetary Sciences. “This was about 90 million to 100 million years ago, which is about the same time as a massive flare-up of arc volcanoes along what is today the Pacific rim of the Western United States.”

Lee said that there have always been hints of a connection between ancient volcanic eruptions and unconventional shale hydrocarbons. During field trips out to West Texas, he and Rice students noticed hundreds of ash layers in exposed rock that dated to the Cretaceous period when much of western North America lay beneath a shallow ocean.

Lee said the team determined that ash had come from hundreds of eruptions that spanned some 10 million years. The layers had been transported several hundred miles east of their volcanic source in California. The ash was deposited on the seafloor after being blown through plumes that rose miles into the atmosphere and drifted over the ocean. Lee and students analyzed samples of the ash beds in the geochemical facilities at Rice.

“Their chemical composition didn’t look anything like it would have when they left the volcano,” he said. “Most of the original phosphorus, iron and silica were missing.”

That brought to mind the oceanic “dead zones” that often form today near the mouths of rivers. Overfertilization of farms pumps large volumes of phosphorus down these rivers. When that hits the ocean, phytoplankton gobble up the nutrients and multiply so quickly they draw all the available oxygen from the water, leaving a “dead” region void of fish and other organisms.

Lee suspected the Cretaceous ash plumes might have caused a similar effect. The research was funded by the National Science Foundation, the Guggenheim Foundation and the Geological Society of America.