October 27th, 2020
Antarctic Ozone Hole Is One of the Largest And Deepest in Recent Years 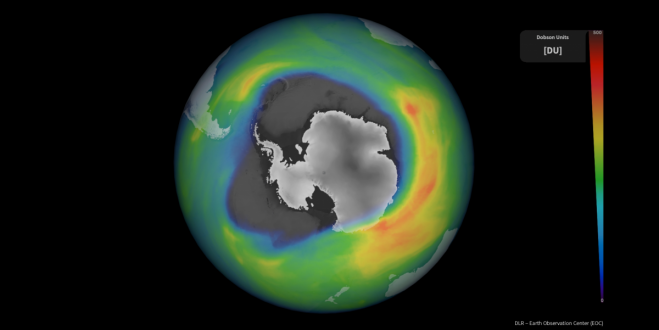 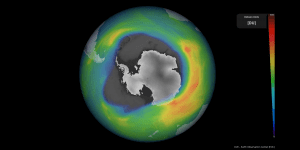 The size of the ozone hole over the Antarctic fluctuates on a regular basis. From August to October, the ozone hole increases in size, reaching a maximum between mid-September and mid-October. When temperatures high up in the stratosphere start to rise in the southern hemisphere, the ozone depletion slows, the polar vortex weakens and finally breaks down, and by the end of December ozone levels return to normal.

Measurements from the Copernicus Sentinel-5P satellite show that this year’s ozone hole is one of the largest and deepest in recent years. This year’s ozone hole reached its maximum size of around 25 million square kilometers on Oct. 2, 2020, comparable to the sizes of 2018 and 2015. Last year, the ozone hole not only closed earlier than usual, but was also the smallest hole recorded in the last 30 years.

The variability of the size of the ozone hole is largely determined by the strength of a strong wind band that flows around the Antarctic area. This strong wind band is a direct consequence of Earth’s rotation and the strong temperature differences between polar and moderate latitudes.

If the band of wind is strong, it acts like a barrier: air masses between polar and temperate latitudes can no longer be exchanged. The air masses then remain isolated over the polar latitudes and cool down during the winter.