The somber ecological consequences of human-caused landscape change and unsustainable water use in a western watershed are carefully examined in the recently published book, Requiem for the Santa Cruz: An Environmental History of an Arizona River (University of Arizona Press). 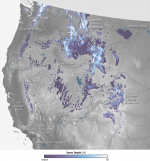 Snowpack Across the U.S. West