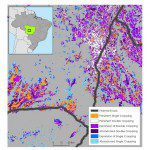 Climate change is a “threat multiplier” and a critical component of future defense strategy, according to the Pentagon’s Quadrennial Defense Review 2014 released yesterday.

With loss and damages from disasters increasing globally, Japan and the World Bank launched a new program today that will help improve disaster risk management in developing countries. Activities under this program will have a strong focus on strengthening resilience, including risk identification, risk reduction, preparedness and financial protection – connecting Japan’s knowledge with global

A Hanscom-managed program that continually provides critical imagery to warfighters and first responders is also reducing costs. Eagle Vision consists of five deployable satellite downlink stations that collect, process and distribute commercial satellite imagery in near-real-time. The data not only can be used to highlight areas of interest for U.S. or coalition warfighters in the

Twenty years after gaining independence, Eritrea’s prisons are filled with thousands of political prisoners who are locked up in atrocious conditions without ever being charged with a crime, said Amnesty International Wednesday in a briefing that includes a map offering an unprecedented look at the network of secret prisons.

Harvard Humanitarian Initiative’s Signal Program on Human Security and Technology (Signal Program) today released an unprecedented study of the ongoing conflict in Sudan based entirely on a fusion of archival satellite imagery and data in the public domain, most often the statements of the armed actors themselves. Sudan: Anatomy of a Conflict found that the