Lighting Sensor to be Installed on the International Space Station

Researchers at NASA’s Marshall Space Flight Center in Huntsville, Ala., developed a sophisticated piece of flight hardware called a Lightning Imaging Sensor (LIS) to detect and locate lightning over the tropical region of the globe. Launched into space in 1997 as part of NASA’s Tropical Rainfall Measuring Mission (TRMM), the sensor undertook a three-year baseline

NASA is partnering with the California Department of Water Resources (DWR) to develop and apply new technology and products to better manage and monitor the state’s water resources and respond to its ongoing drought.   NASA scientists, DWR water managers, university researchers and other state resource management agencies will collaborate to apply advanced remote sensing

NASA officials will participate in a media briefing at 9:30 a.m. PST Tuesday, Feb. 25 about the agency’s work to use its Earth observation assets to help the state of California better manage its water resources and monitor and respond to its ongoing drought. 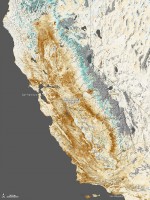 Persistent dry weather has grown more worrisome in the American West, with nearly two thirds of the region experiencing some level of drought. By most measures, the state of California is suffering through the worst of it. The effects of the dry spell are visible in the mountains, where snow pack is lacking, and now

The rover’s view of its original home planet even includes our moon, just below Earth. The images, taken about 80 minutes after sunset during the rover’s 529th Martian day (Jan. 31, 2014) are available at http://photojournal.jpl.nasa.gov/catalog/PIA17936 for a broad scene of the evening sky, and at http://photojournal.jpl.nasa.gov/catalog/PIA17935 for a zoomed-in view of Earth and the

It takes a lot of land to grow food for the world’s seven billion people. About a third of Earth’s terrestrial surface is used for agriculture. And about a third of that, in turn, is used to grow crops. Now, a new NASA-funded effort aims to map crop fields worldwide, identify what’s growing where, and

While felines in space may be what you’re thinking, the Cloud-Aerosol Transport System (CATS) is a much more helpful accompaniment planned for the International Space Station. CATS will study the distribution of aerosols, the tiny particles that make up haze, dust, air pollutants, and smoke.

NASA Set for a Big Year in Earth Science

For the first time in more than a decade, five NASA Earth science missions will be launched into space in the same year, opening new and improved remote eyes to monitor our changing planet.