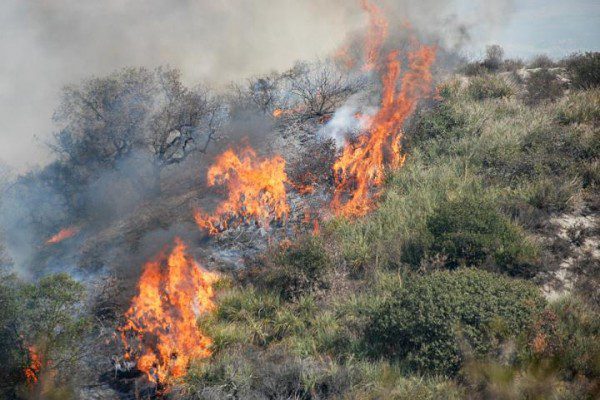 RIVERSIDE, Calif.—When plant matter burns, it releases a complex mixture of gases and aerosols into the atmosphere. In forests subject to air pollution, these emissions may be more toxic than in areas of good air quality, according to a new study by the University of California, Riverside and the U.S. Forest Service’s Pacific Southwest Research Station.

The results suggest biomass burning of polluted forest fuels may exacerbate poor air quality–and related health concerns–in some of the world’s most heavily polluted areas, among them, the Los Angeles metropolitan area, which is expected to suffer from more wildfires as drought conditions continue.

As people burn fuels–in cars, power plants and factories–nitrogen is released into the atmosphere and absorbed by plants. While essential for plant growth, an over-abundance of this biologically-available nitrogen can result in ‘nitrogen saturation,’ a phenomenon previously reported by Forest Service scientists in Riverside. Nitrogen saturation can cause a cascade of adverse effects including a decrease in biodiversity, changes in plant species, soil acidification and water contamination.

In this paper, UCR and Forest Service researchers teamed up to explore a previously unstudied aspect of nitrogen saturation: its effect on the gases and aerosols released during burning of forest fuels from an area experiencing nitrogen saturation.

Scientists conducted the study in the San Bernardino Mountains, a 60-mile stretch of federal and private forest land to the east of the Los Angeles metropolitan area. Since the pollution concentration decreases from west to east, as the distance from Los Angeles increases, the forests offered a rare opportunity to compare emissions from wildland fuels subjected to different levels of chronic air pollution. At sites 55 miles apart, the researchers collected recently deposited material from the forest floor, called litter, which is a primary fuel in these forests. Both sites have a similar mixture of conifer tree species, and, at the time of collection, had experienced similar temperatures and rainfall.

As shown in previous studies, the litter from the polluted site, which had endured high levels of atmospheric nitrogen oxides and ozone, had higher nitrogen content than litter from the clean site. The researchers then burned the litter in controlled lab tests, collected the emissions and analyzed them.

Asa-Awuku, an associate professor of chemical and environmental engineering at the CE-CERT, said agencies that oversee prescribed burns should consider these findings when they predict the likely impact of prescribed burning of forest fuels in areas subjected to chronic air pollution.

“The environmental impact of prescribed burns has historically been based on data from clean fuels in areas of good air quality, so we have likely been under-predicting the impact of biomass emissions in polluted areas,” Asa-Awuku said.

She added that the study supports growing evidence that humans need to reduce our pollutant footprint associated with burning fossil fuels.

“This study, and specifically the concern that biomass grown and burned in polluted areas is potentially more toxic to human health, is additional evidence that human activities have consequences not yet explored and therefore not understood,” she said.