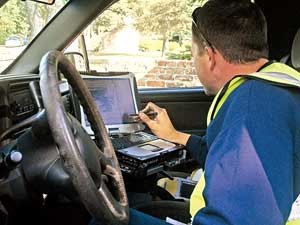 “Almost everything in public works and community government is tied to geographic locations,” says Terry Biederman, director of public works. “Our goal is for personnel to never leave the GIS environment, yet be able to retrieve spatial information, access documents and create work orders.”

The water utility, with 24,000 connections, 360 miles of main, 11 treatment plants, and average demand of 8.5 mgd, is especially enthusiastic about GIS and has found ways to integrate asset management, document management, system modeling, planning, locating, SCADA and more right into the GIS interface.

This means databases aren’t duplicated, and users don’t have to switch applications –ever. The result is big savings and maximum efficiency. In fact, the public works department is so efficient that citizens call with questions that have nothing to do with public works — because they know the DPW is very good at coming up with answers.

Getting Started
“Our vision from the beginning was to have an enterprise-wide GIS,” says Biederman. “Back in 1996, we did a needs assessment and hired a consultant who created a report detailing our hardware, software and staffing needs. That became our ‘constitution’ — the document we took to our board for approval and funding. We knew that having the right framework from the beginning was important, and that having dedicated staff was necessary.”

Waterford is in Oakland County, and in 1996 Oakland had already selected ESRI for GIS software. Waterford selected ESRI as well and had begun converting the parcel base. While completing this work, the township commissioned aerial photography at 6-inch per pixel resolution. Waterford now works with the county to update aerial photography annually.
Township staff also began digitizing assets into the system by using paper mapping to assign rough coordinates. “After getting the parcel base, we began to digitize,” explains Bill Fritz, system administrator. “We had a water model in place and used college interns and staff to put in what was missing.”

“As you go you learn things,” says information systems administrator Frank Fisher. “Now when we get proposed plans, we GPS as we go, instead of finding it later. We turn the GPSing into an inspection and get all the relevant information we can.
That includes attributes like hydrant color — color-coding indicates hydrant pressure and volume and is useful to the fire department. It also includes age, condition, number of nozzles, and other items.”

Integrated by Design
Waterford places unusual emphasis on integration — working with many applications on a single database, and all within the ESRI GIS interface. This means the township is sometimes on the forefront of GIS applications and has occasionally led the way when working with vendors to adapt applications.

“Our goal is to minimize customization,” says Fritz. “We use existing products that take us 80 percent of the way and work with vendors to get things integrated. We don’t like to write the code itself, but we do like to push it to its limits.”

NAGCS certified applications work directly with ESRI databases without redundant data storage and are designed for maximum interoperability with other GIS-centric applications.

All the Pieces
“We built the GIS to show infrastructure, and as a platform for applications,” says Biederman. “Our vision was to build applications right in the GIS.” This focus made some application decisions easy.

For example, InfoWater from MWH Soft was one of few NAGCS certified modeling applications available, and it came from an ESRI partner. So water and sewer modeling, which are highly specialized applications, could be done in the GIS with off-the-shelf software.

Because it focused on existing applications, rather than extensive customizing, the township Waterford has spent a lot of time analyzing and adapting existing software. One big decision made early on was to use CityWorks, a NAGCS certified asset maintenance management system.

“To users, CityWorks is the GIS — it’s the gateway to our business processes,” says Biederman. “Everything related to a work activity is geocoded back to our infrastructure. We track costs, labor, materials, everything.”

The water and sewer departments use CityWorks to manage data, schedule maintenance, track maintenance history, issue work orders, and organize customer information. The software eventually will be the basis of utility billing, SCADA access, wireless field applications and more. A user will be able to click on a section of, say, water main, and have instant access to design and engineering documents, video inspection footage, maintenance history, and other relevant data, all without switching interfaces.

Managing Documents
For document management, Waterford uses OnBase. “The next evolutionary step for government GIS systems is document storage,” says Biederman. “Nearly everything in public works and community government is tied to geographic location, and the ultimate goal is for all personnel to use GIS and leverage the power of document management within the application.”
Currently, OnBase tracks about 330,000 documents, and all can be retrieved spatially — a just click on, say, a house — or by conventional archiving methods. Documents in the system range from work orders to plans to deeds, and the number is growing rapidly.

A relatively minor piece of the system illustrates the advantages of integration. Working with CityWorks and MissDig, Michigan’s one-call service, utility locating was reasonably automated, but it did take several steps and required the use of disparate systems, including e-mail and a separate database.

“What used to take six to eight minutes now takes two,” says Biederman. And once again, Waterford pushed the technology. “The integration of DigSmart and CityWorks represents more than just a solution for the Waterford Township,” says Jim Schoenberg of Bergmann Associates. “It clearly shows how a common geodatabase can serve as the backbone for solving today’s business needs.”

With similar attention to detail and attention to integration, Waterford has found solutions for modeling, SCADA monitoring, planning, time management and other aspects of day-to-day operation. When new challenges arise, staff looks to the GIS as the root of solutions.

Other Technology
Waterford looks to technology in other areas as well, but GIS is always a factor. The township’s SCADA system is based on Opto 22 hardware, and GE Intellution software is increasingly integrated into the GIS. It can monitor ingress/egress, chlorine leaks, pumps and most other important functions, and it interfaces with an alarming package.

The township uses Pearpoint CCTV system for line inspection, and attaches footage to the GIS. The community’s Vactor 2000 combination trucks have their schedules optimized by RIVA asset management software from Loki Innovations, which runs within the GIS.

And meter reading is fully automated via an Itron system : two fixed collectors are mounted on water towers, the collectors are connected by ethernet to the broadband WiFi system, information is routed to Itron offices in Spokane, Wash., and Waterford staff can log in and retrieve it.

“Nobody has to drive anywhere or do anything,” says Biederman. “We log in and monitor things like consumption and reverse flow, and we dump the readings file into our billing system.” He adds one caveat: “Fixed collector systems do need high-resolution meters in order to get the most value.”

Waterford has made a big investment in WiFi, and wireless broadband is available to city staff throughout the township. Most crews are equipped with Toughbook laptop computers from Panasonic. “They have access to the GIS just like they’re sitting at a desk,” says Biederman. Vehicles are also fitted with CompassCom hardware and software, for automatic vehicle locating within CityWorks.
{sidebar id=119}
Never Finished
“This isn’t the kind of project that gets completed,” says Fritz. “We’re continually adding and modifying. You don’t just finish it and put it on a shelf.”

Biederman adds, “Our GIS is a living thing. You don’t want to computerize a bad business activity. You want to keep looking at it closely and improve.”

And the system is always growing as Waterford finds more ways to attach government business to real world coordinates. If NAGCS certification can be obtained, MUNIS, the township’s financial package from Tyler Technologies, will be incorporated, and various long-term planning and infrastructure investment applications are being considered.

Waterford knew from the beginning what it wanted from a GIS: an enterprise-wide system that created value in every sector of government. The staff had one key piece of the approach figured out early — a GIS and complementary applications built around a single database and interface.

But the staff was not rigid. By paying attention to what worked and what didn’t, and reevaluating as needed, Waterford built a flexible, sophisticated system that goes a long way toward simplifying the complexities of local government.

This article first appeared in the January issue of Municipal Sewer & Water magazine. It is reprinted by permission.