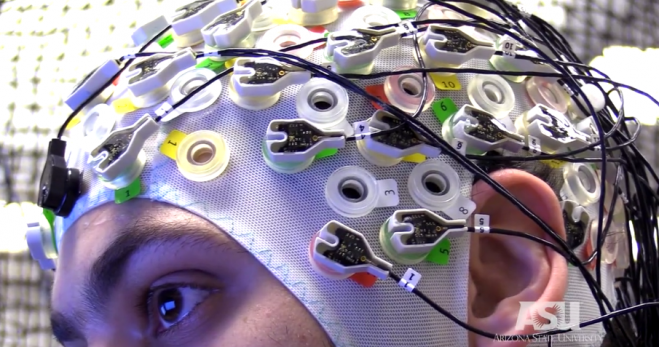 A researcher at Arizona State University has discovered how to control multiple robotic drones using the human brain.

A controller wears a skull cap outfitted with 128 electrodes wired to a computer. The device records electrical brain activity. If the controller moves a hand or thinks of something, certain areas light up.

“I can see that activity from outside,” said Panagiotis Artemiadis (pictured above), director of the Human-Oriented Robotics and Control Lab and an assistant professor of mechanical and aerospace engineering in the School for Engineering of Matter, Transport and Energy in the Ira A. Fulton Schools of Engineering. “Our goal is to decode that activity to control variables for the robots.”

If the user is thinking about decreasing cohesion between the drones — spreading them out, in other words — “we know what part of the brain controls that thought,” Artemiadis said.

A wireless system sends the thought to the robots. “We have a motion-capture system that knows where the quads are, and we change their distance, and that’s it,” he said.

Up to four small robots, some of which fly, can be controlled with brain interfaces. Joysticks don’t work, because they can only control one craft at a time.

“You can’t do something collectively” with a joystick, Artemiadis said. “If you want to swarm around an area and guard that area, you cannot do that.”

To make them move, the controller watches on a monitor and thinks and pictures the drones performing various tasks.

Artemiadis has been working on the brain-to-machine interface since he earned his doctorate in 2009, specifically neural interfaces with robot hands and arms.

“During the last two to three decades there has been a lot of research on single brain/machine interface, where you control a single machine,” he said.

A few years ago, he had the idea to go to a lot of machines. It’s part of a trend in robotics and space exploration: Instead of building one giant expensive machine or plane or spacecraft, researchers build a lot of little cheap ones.

“If you lose half of them, it doesn’t really matter,” Artemiadis said.

He already knew what area of the brain controlled what motions. One discovery jumped out at him.

“I was surprised the brain cares about swarms and collective behaviors,” he said.

“What I didn’t know — or hypothesized — is that the brain cares about things we are not doing ourselves,” he added. “We don’t have a swarm we control. We have hands and limbs and all that stuff, but we don’t control swarms.”

In other words, our brains are not used to all of our fingers and toes running off on their own and then returning.

He worked with Air Force pilots on this; the two-year project was funded by the Defense Advanced Research Projects Agency of the U.S. Department of Defense and the Air Force. The pilots were skeptical. Their main objection was what would happen if they thought of something else while controlling the drones.

Artemiadis said controllers have to stay focused. If it’s close to lunch and all you can think about it is pizza, it doesn’t work. Fatigue and stress also play a part. Artemiadis said he can tell when subjects are tired or need a break.

“We tell the subject to think of two things,” he said. “Focus on breathing, or we tell them to imagine closing their left hand into a fist.”

Each subject is different. The system has to be calibrated to individual controllers, and it has to be done every day, because brain signals change from day to day.

The next step in Artemiadis’ research is multiple people controlling multiple robots. He plans to move to a much larger experimental space to refine the proof of concept. In the future, he sees drone swarms performing complex operations, such as search-and-rescue missions.