Ball Aerospace & Technologies Corp. has delivered the next-generation commercial remote sensing satellite built for DigitalGlobe, to the launch facility at Vandenberg Air Force Base, California. The WorldView-3 satellite is slated to fly aboard a United Launch Alliance Atlas 5 rocket in mid-August for DigitalGlobe, a leading provider of commercial high-resolution earth observation and advanced

The Japan Aerospace Exploration Agency (JAXA) acquired images from the Phased Array Type L-band Aperture Rader-2 (PALSAR-2)* aboard the Advanced Land Observing Satellite-2 “DAICHI-2” (ALOS-2) as shown in the following attachment. The DAICHI-2 was launched on May 24, 2014, and it is currently under initial functional verification. The images were captured during the verification stage.

Information provided by satellites on the amount of chlorophyll-A and the roughness of the sea following the eruption of the underwater volcano off the island of El Hierro (Spain) did not coincide with the actual data collected in situ by vessels carrying out oceanographic studies. The models have been corrected by researchers at the University

NASA is launching two challenges to give the public an opportunity to create innovative ways to use data from the agency’s Earth science satellites. The challenges will use the Open NASA Earth Exchange. OpenNEX is a data, supercomputing and knowledge platform where users can share modeling and analysis codes, scientific results, knowledge and expertise to

The Occasion Of The Earsc 25th Anniversary, Geoville Has Been Presented With The Earsc Company Achievement Award During The Celebration Event Held On 25Th June In Brussels. EARSC has thereby recognised GeoVille as the company to have made the most significant contribution to the development of the Earth Observation sector in Europe.

SPOT 7, the cornerstone of the Airbus Defence and Space Earth Observation Satellite Constellation, is now ready for launch! After its transfer to the Satish Dhawan Space Centre in India on May 13th, SPOT 7 has now been integrated with the PSLV launcher that will carry it into orbit on June 30th.

Every time you buy seafood at a restaurant, store, or waterfront dock there is a 1-in-5 chance that the fish was caught outside the law. Illegal and unreported fishing worldwide accounts for up to 26 million metric tons of fish annually, worth up to $23.5 billion. That equates to more than 1,800 pounds of wild-caught

You are invited to the 36th International Symposium on Remote Sensing of Environment (ISRSE), which will take place on May 11-15, 2015 in Berlin, Germany. This 36th Symposium will represent a major event in the long series of internationally recognized ISRSE meetings. The overall theme of the sympo- sium is the use of Earth Observation

exactEarth Ltd., a leading provider of global maritime vessel data, is pleased to announce a new partnership with the Marine Environmental Observation Prediction and Response Network (MEOPAR).  exactEarth is proudly joining the MEOPAR network as one of the first commercial partners and is excited to support new internships and various workshops, while also collaborating to 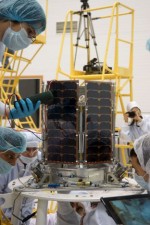