March 9th, 2016
Study Suggests Impact of Climate Change on Agriculture May Be Underestimated 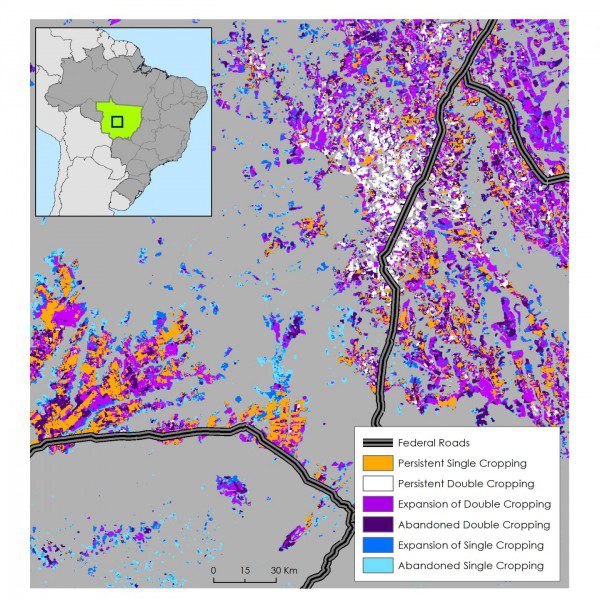 PROVIDENCE, R.I. [Brown University] — One of the most critical questions surrounding climate change is how it might affect the food supply for a growing global population. A new study by researchers from Brown and Tufts universities suggests that researchers have been overlooking how two key human responses to climate — how much land people choose to farm, and the number of crops they plant — will impact food production in the future.

The study, published in Nature Climate Change, focused on the Brazilian state of Mato Grosso, an emerging global breadbasket that as of 2013 supplied 10 percent of the world’s soybeans. The researchers used variations in temperature and precipitation across the state over an eight-year period to estimate the sensitivity of the region’s agricultural production to climate change. Those historical comparisons can help in making predictions about the sensitivity of agriculture to future climate change.

The study found that, if the patterns from 2002 to 2008 hold in the future, an increase in average temperature in Mato Grosso of just 1 degree Celsius will lead to a nine to 13 percent reduction in overall production of soy and corn. “This is worrisome given that the temperature in the study region is predicted to rise by as much as 2 degrees by midcentury under the range of plausible greenhouse gas emissions scenarios,” said Avery Cohn, aassistant professor of environment and resource policy at Tufts, who led the work while he was a visiting researcher at Brown.

But the study’s broader implications stem from the mechanisms behind the changes in agricultural output. Most studies of this kind look only at the extent to which climate shocks affect crop yield–the amount of product harvested from a given unit of agricultural land. But by only looking at that single variable, researchers can miss critical dynamics that can affect overall output, says Leah VanWey, professor of sociology at Brown and senior deputy director of the Institute at Brown for the Study of Environment and Society (IBES).

“If you look at yields alone, you’re not looking at all of the information because there are economic and social changes going on as well,” said VanWey, one of the study’s senior authors. “You’re not taking into account farmers’ reactions to climate shocks.”

For example, farmers may react to decreasing yields by putting less land area into production because it’s simply not profitable. Farmers may also vary the number of crops they plant in a growing season. Double cropping–the planting of two successive crops in the same field in the same growing season–is common in Mato Grosso. If the weather is bad, farmers may alter their decision to plant a second crop.

For this new study, the researchers looked not only at crop yield, but also at year-to-year variation in crop area and double cropping. To develop those additional datasets, Cohn and VanWey worked with Jack Mustard, professor of earth, environmental and planetary sciences at Brown, and graduate student Stephanie Spera. Mustard and Spera gathered imagery of the Mato Grosso region from NASA’s MODIS satellite, which monitors land cover and land use all over the world.

In the satellite data, cropland is identified as areas that turn green during the growing season, and then quickly become brown, indicating a harvest. Two green-ups in the same growing season indicate the land is being double-cropped.

“The changes in cropping that we quantified with remotely sensed data were stunning,” Mustard said. “We can use those satellite data to better understand what’s happening from a climate, economic, and sociological standpoint.”

The study showed that temperature increases of 1 degree Celsius were associated with substantial decreases in both total crop area and double cropping. In fact, those decreases accounted for 70 percent of the overall loss in production found in the study. Only the remaining 30 percent was attributable to crop yield.

“Had we looked at yield alone, as most studies do, we would have missed the production losses associated with these other variables,” VanWey said.

Taken together, the results suggest that traditional studies “may be underestimating the magnitude of the link between climate and agricultural production,” Cohn said.

That’s especially true in places like Brazil, where agricultural subsidies are scarce compared with places like the U.S.

“This is an agricultural frontier in the tropics in a middle-income country,” VanWey said. “This is where the vast majority of agricultural development is going to happen in the next 30 to 50 years. So understanding how people respond in this kind of environment is going to be really important.”

VanWey said a next step for this line of research might be to repeat it in the U.S. to see if increased subsidies or insurance help to guard against these kinds of shocks. If so, it might inform policy decisions in emerging agricultural regions like Mato Grosso.

“We may need to figure out a way to create incentives — credit products or insurance — that can reduce farmers’ responses to climate shocks,” VanWey said.