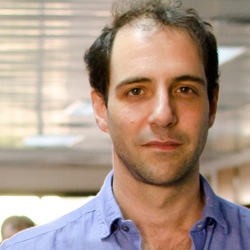 This year appears to be the year for the widespread commercialization of low Earth orbit earth observation satellite constellations, with many notable announcements. Satellogic just recently announced plans for a constellation of their own satellites that they call CubeBugs, after the successful launch and testing of two satellites in 2013. Sensors & Systems (S&S) editor Matt Ball recently spoke with the company founder Emiliano Kargieman about the company’s technology, approach and vision.

S&S: This announcement of your earth observation satellite constellation came as a surprise to me, particularly upon learning that you’ve already launched two test satellites last year.

S&S: You’re from Argentina, and the satellite was built in Buenos Aires. Is the company located in South America, and are there advantages for being located there?

Kargieman: We started the company in the United States, and decided to set up the research and development in Patagonia originally. Now we have a team that’s distributed in several countries, with research and development in Argentina, Israel, the United Kingdom, and France. Our company headquarters is in Palo Alto, California. You could say that we’re a small multinational company at this stage. We try to do things where it makes most sense. It made a lot of sense to build R&D facilities outside of the United States for this stage of the project.

S&S: There are many companies launching small satellites for low earth orbit earth observation. It’s an interesting development that must speak to costs coming down and technological evolution, among other factors.

Kargieman: It’s a very exciting time for earth observation. People started realizing a few years ago that the technology to build satellites and spacecraft did not have to be exclusive with big space agencies or governments with huge budgets. New developments in commercial electronics, rapid manufacturing techniques, and new engineering practices are being applied to the space industry, and small companies have access. This creates a nice opportunity to figure out new ways to use technology to do things from space.

S&S: Your background is that of a serial entrepreneur, co-founding Core Security, among other ventures. Have you had a background or long-standing interest in space?

Kargieman: My formal background is in mathematics, but I’ve been building technology companies for most of my life. I have built mostly software companies, with information security software as the area that I’ve come from most recently. I have had no previous experience in the space industry, but I looked very closely at the development of space technology in 2010, and saw a good opportunity to bring some of the things that we’ve learned to do in the software industry, from the engineering methodologies to a component approach, to increase the pace of innovation.

S&S: Do you have a set target in terms of industry verticals that you want to reach and build solutions for or are you more about building the capacity at this point for streaming imagery online?

Kargieman: We are looking at some of the big problems that our planet is going to face in the next 20 years. When you look at that, you can see there are a group of problems around food production and distribution and food security, and then around energy production and distribution, and around the management of natural resources. Decisions about these areas are going to be really crucial over the next 10 to 20 years. We’ve been making decisions about how to manage these areas with very partial information.

We think we’re in a position to provide quantified data with our distributed sensor network around the Earth. These new data streams can quantify the state of the Earth, and allow us to make more informed decisions from both a day-to-day basis and also policy decisions with a more complete picture of what’s taking place. We see the customer base as both individual, with farmers and even consumers subscribing to this information, as well as large corporations and governments.

S&S: Our readership is primarily mapping and earth observation professionals, so can you share some specific technical details about your satellites in terms of their size, earth imagery resolution, as well as your plans for the constellation of satellites?

Kargieman: We’re applying some iterative engineering practices to the space industry for the first time. You can think of the prototypes that we launched last year, and the satellite that we’re getting ready to launch, as iterative improvements getting us to the satellites that we plan to build. We have used our previous satellites to test the components, sensors, actuators, and all the things that we’ve needed to build to make our vision a reality. The satellite that we’re launching in June is the first one that will be able to give us high-resolution imaging and video with under two meters of resolution. It’s a spacecraft that weighs under 25 kilos (roughly 50 pounds), and it looks like an old desktop PC cabinet.

Based on this small, low-cost spacecraft, we’re planning to launch a constellation in 2015 on the order of tens of spacecraft. We want to scale it up from there to hundreds of satellites roaming the Earth and generating real-time imagery in high resolution.

S&S: Are you launching one at a time or would you launch multiples at the same time, and what launch providers are you using?

Kargieman: Today, we’re launching only one. In the future we plan to launch in sets of more than one to get to the numbers that I mentioned.

We’re talking to all the launch providers. We’ve picked so far the ones that are the best combination in terms of availability, price and the orbits that match what we want to do. We are considering the International Space Station among six or seven other launch providers.

The idea of clustered launches has been standardized over the past few years, and provides a great deal of flexibility, particularly for launching demonstration satellites where you need a small spacecraft to hitch a ride on a rocket that’s taking bigger things to space. That standardization has helped a lot to create this availability of launch capabilities. We’re following very closely the commercialization of space with what SpaceX is doing as well as other more recent startups working on new launch technologies that will change the face of things in the next decade or less than that. S&S: What’s the lifecycle of an individual satellite?

Kargieman: We’re building them for a three-year lifecycle. After that time we make them crash down through the atmosphere, and because of the size and the velocity, they basically disintegrate upon re-entry. It’s important when you start moving toward the democratization of space that we take into account what’s in space already, and the desire to not clutter space with non-working satellites. We want to keep space clean so that in the future other people will be able to launch their own, and also keeping them where they won’t bother anyone.

S&S: What sensor capability do you plan to have on the satellite? Are there multispectral capabilities that will make for unique data products?

Kargieman: We are taking multispectral images in five spectral bands including visible spectrum and near infrared spectrum, and we’re in a position where we can generate indices for use in different applications such as agriculture, oil and gas, and different monitoring missions.

S&S: Do you have designs on data products?

Kargieman: We take these images and video to build a platform to process this and do semantic analysis and generate information that is useful for different sets of customers. At this point we’re working with customers to co-develop the initial data products and solutions to take images and generate information that they need for day-to-day operations.

S&S: Do you have a customer pipeline already, and what’s the funding like?

Kargieman: We’ve been funding the company through a combination of private investment and revenues, and we’ll continue to do pretty much the same thing while we scale up. We’re in conversation with customers with a strong customer pipeline in the vertical markets that I’ve mentioned. We’re working closely with customers so that when we have more data products that we’ll have the customers interested in using this data already lined up.

S&S: With so much commercialization taking place now, do you see space technology going back to just large companies or governments?

Kargieman: There are many companies that are proving that technology can be built in different ways to go to space, and it would be difficult to go back to the old model. There are people building rockets, spacecraft, and how space can be used to service the Earth or even to think of things such as asteroid mining. We’re living in a really interesting time, and it’s hard to believe that we’d go back to a time where space is controlled by a few governments or institutions. I think that the democratization of space has already happened.