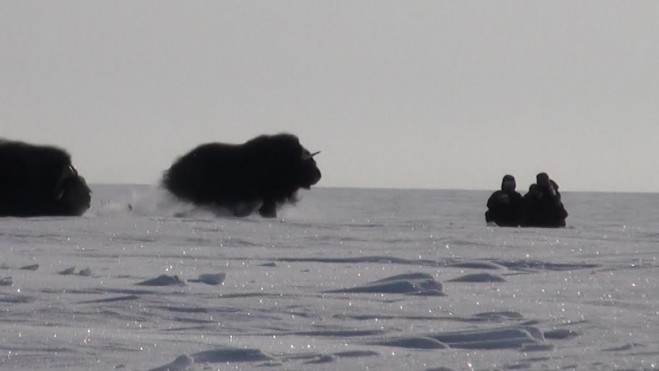 NEW YORK, June 1, 2016—The Wrangel Island Federal Reserve, a remote island some 300 miles north of the Arctic Circle in Russia, was recently the site of an expedition to understand the impacts of climate change and polar bear predation on muskoxen—a Pleistocene relic that survived the woolly mammoths and woolly rhinos that once roamed this northern Siberian tundra.

The accelerating phenomenon of melting sea ice, driven by climate change, is forcing more and more polar bears to seek prey on land rather than the ice. Expedition results will be used to understand this quickly-changing predator-prey dynamic, and to help guide conservation and management efforts in the High Arctic.

Expedition members brought back stunning photos and video taken during this expedition, including a charge of the scientists by a muskox. Berger approached a herd of 40 muskoxen dressed alternately as a polar bear and as a caribou, to gauge responses to species the animals may increasingly encounter due to climate change. Also included are the stark images of the barren tundra and the remains of Russian buildings that once that once provided protection for miners and fisherman in the mountainous island.

“The land is pristine and hosts wolves and wolverines, polar bears and muskoxen,” said Dr. Alexander Gruzdev, Director of the protected area. “If ever there was a place of Arctic grandeur, it is Wrangel.”

The ongoing study is not the first collaboration between Russia and the United States where muskoxen are concerned. While the species today exists in Greenland and parts of the North American Arctic, muskoxen died out in Asia during the recent past. They were returned to Siberia beginning in 1975 through a joint Russian-U.S. program.  The population on Wrangel Island today is estimated at roughly 900 individuals.

Berger stated, “Grizzly bears are becoming efficient at eating muskoxen in Alaska, but are absent on Wrangel Island. Our goal – in consort with our Russian collaborators – has been to contrast how the polar bears of Wrangel deal with muskoxen and, just as critically, how muskoxen deal with them in return.  We believe that once our analyses are complete, we’ll come away with much greater insights about the novelty of prey-predator interactions that result from climate change and what this means more broadly across the Arctic.” Indeed, how these iconic Arctic species respond to one another when forced into close proximity by climate change will hugely guide their conservation and management in the future.

The team used photogrammetry, a technique used to photograph the head sizes of young muskoxen so that annual growth can be measured and related to different climatic variables.  Such measurements will help determine how the Wrangel Island population is faring in comparison with populations WCS and collaborators study in Arctic Alaska, a region warming faster than northeastern Siberia, and where hunting is permitted on the herds. Ultimately, this information will be used to inform the conservation of the species by identifying and addressing which specific factors are limiting muskoxen health, growth and survival.

Berger continued, “It’s humbling to be in a land so raw and so beautiful; it’s a piece of the planet where one can watch the Pleistocene still unfold with many of the players who shared the environment with mammoths.  It’s just as compelling to work side by side with Russians who share the same vision of the future, one with conservation of our joint Arctic natural heritages at the forefront.”

This WCS-led project was funded by the Trust for Mutual Understanding and the National Park Service’s Shared Beringian Heritage Program. .

MISSION: WCS saves wildlife and wild places worldwide through science, conservation action, education, and inspiring people to value nature. To achieve our mission, WCS, based at the Bronx Zoo, harnesses the power of its Global Conservation Program in nearly 60 nations and in all the world’s oceans and its five wildlife parks in New York City, visited by 4 million people annually. WCS combines its expertise in the field, zoos, and aquarium to achieve its conservation mission.