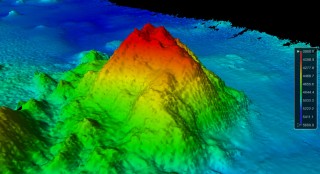 University of New Hampshire scientists on a seafloor mapping mission have discovered a new seamount near the Johnson Atoll in the Pacific Ocean. The summit of the seamount rises 1,100 meters from the 5,100-meter-deep ocean floor.

The seamount was discovered in August when James Gardner, research professor in the UNH-NOAA Center for Coastal and Ocean Mapping/Joint Hydrographic Center, was leading a mapping mission aimed at helping delineate the outer limits of the U.S. continental shelf.

Working aboard the R/V Kilo Moana, an oceanographic research ship owned by the U.S. Navy and operated by the University of Hawaii, Gardner and his team were using multibeam echosounder technology to create detailed images of the seafloor when, late at night, the seamount appeared “out of the blue.” The team was able to map the conical seamount in its entirety.

The yet-unnamed seamount, located about 300 kilometers southeast of the uninhabited Jarvis Island, lies in one of the least explored areas of the central Pacific Ocean. Because of that, Gardner was not particularly surprised by the discovery.

“These seamounts are very common, but we don’t know about them because most of the places that we go out and map have never been mapped before,” he says. Since only low-resolution satellite data exists for most of the Earth’s seafloor, many seamounts of this size are not resolved in the satellite data but advanced multibeam echosounder missions like this one can resolve them. “Satellites just can’t see these features and we can,” Gardner adds.

While the mapping mission was in support of the U.S. Extended Continental Shelf Task Force, a multi-agency project to delineate the outer limits of the U.S. continental shelf, the volcanic seamount lies within the U.S. exclusive economic zone. That means the U.S. has jurisdiction of the waters above it as well as the sediment and rocks of the seamount itself.

The seamount’s impact remains unknown – for now. It’s too deep (its summit lies nearly 4,000 meters beneath the surface of the ocean) to be a navigation hazard or to provide rich fisheries. “It’s probably 100 million years old,” Gardner says, “and it might have something in it we may be interested in 100 years from now.”

A world-renowned marine geologist, Gardner leads CCOM/JHC’s mapping efforts in support of U.S. claims to an extended continental shelf under the United Nations Law of the Sea Convention. He has participated in mapping cruises in the Atlantic, eastern and western Pacific, Gulf of Mexico, Gulf of Alaska and Beaufort Sea and published more than 200 scientific papers. Before joining UNH in 2003, he led the U.S. Geological Survey’s Pacific Mapping Group.

The UNH Center for Coastal and Ocean Mapping/Joint Hydrographic Center was founded in 1999 to develop tools to advance ocean mapping and hydrography and to train the next generation of hydrographers and ocean mappers. The JHC is a formal cooperative partnership between the University of New Hampshire and the National Oceanic and Atmospheric Administration (NOAA) whose aim is to create a national center for expertise in ocean mapping and hydrographic sciences.

The University of New Hampshire, founded in 1866, is a world-class public research university with the feel of a New England liberal arts college. A land, sea, and space-grant university, UNH is the state’s flagship public institution, enrolling 12,300 undergraduate and 2,200 graduate students.