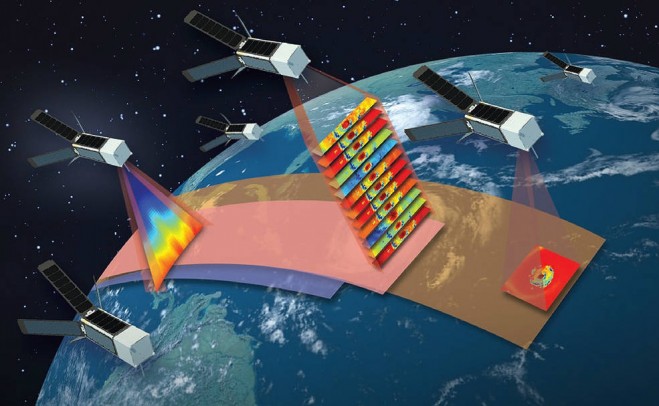 Observations of small atmospheric aerosols from the Multi-Angle Imager for Aerosols (MAIA) will be combined with health information to determine the toxicity of different particulate matter types in airborne pollutants over the world’s major cities. David Diner of NASA’s Jet Propulsion Laboratory (JPL) in Pasadena, California, is the principal investigator.

The Time-Resolved Observations of Precipitation structure and storm Intensity with a Constellation of Smallsats (TROPICS) investigation will develop and launch a constellation of CubeSats to study the development of tropical cyclones through rapid-revisit sampling. William Blackwell of the Massachusetts Institute of Technology’s Lincoln Laboratory in Lexington is the principal investigator.

“We are excited to make selections that expand the use of CubeSats for Earth sciences and that make measurements and perform analyses that will have direct societal benefit,” said Geoffrey Yoder, deputy associate administrator of NASA’s Science Mission Directorate in Washington. “These innovative Earth Venture Instruments will join and expand our growing suite of NASA Earth-observing sensors.”

MAIA uses a twin-camera instrument that will make radiometric and polarimetric measurements needed to characterize the sizes, compositions, and quantities of particulate matter in air pollution. As part of the MAIA investigation, researchers will combine MAIA measurements with population health records to better understand the connections between aerosol pollutants and health problems such as adverse birth outcomes, cardiovascular and respiratory diseases, and premature deaths.

TROPICS will consist of 12 CubeSats, each about one foot long and weighing just 8.5 pounds, that use scanning microwave radiometers to measure temperature, humidity, precipitation and cloud properties. The CubeSats will be launched into three separate orbital planes to enable the overall constellation to monitor changes in tropical cyclones as frequently as every 21 minutes.

The two investigations were selected from NASA’s third Earth Venture Instrument competition. The first Earth Venture Instrument investigation, selected in 2012, the Tropospheric Emissions: Monitoring of Pollution (TEMPO) mission, will be the first space-based sensor to monitor major chemical air pollutants across North American hourly during daytime. It will share a ride on a commercial satellite as a hosted payload and orbit about 22,000 miles above the equator.

The second set of investigations selected in 2014 were the Global Ecosystem Dynamics Investigation (GEDI) and ECOsystem Spaceborne Thermal Radiometer Experiment on Space Station (ECOSTRESS). These instruments will measure changes in global vegetation from the International Space Station, illuminating how forests and ecosystems are affected by changes in climate and land use.

NASA uses the vantage point of space to increase our understanding of our home planet, improve lives, and safeguard our future. NASA develops new ways to observe and study Earth’s interconnected natural systems with long-term data records. The agency freely shares this unique knowledge and works with institutions around the world to gain new insights into how our planet is changing.