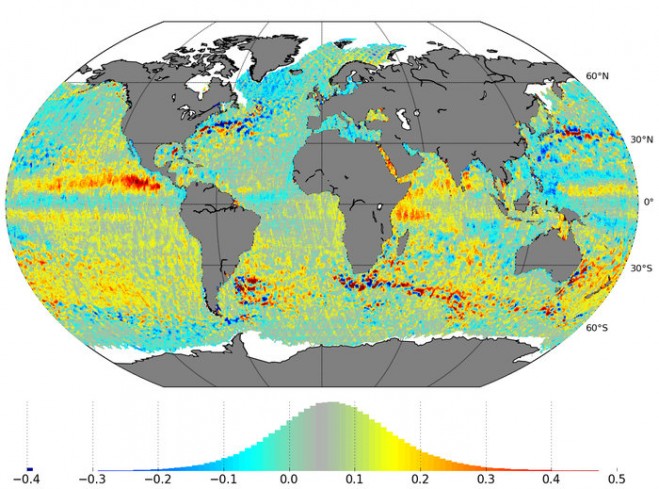 Presented this week at ESA’s Living Planet Symposium in the Czech Republic, this new map shows a month of ‘sea-level anomaly’ measurements from Sentinel-3A. The satellite has only been in orbit since 16 February 2016 and is therefore still being commissioned for service. Nevertheless, measurements made by its radar altimeter between 3 March and 2 April have been used to create this map, which shows differences in sea-surface height compared to the mean.

The plot at the base of the sea-level anomaly map shows the normalised distribution of data, indicating a global mean of 7 cm and a standard deviation of 11 cm.

Using local sea-level variations measured by Sentinel-3’s altimeter and comparing them to a reference level, major ocean currents can be computed and mapped. Mesoscale eddy systems are clearly shown on the map as more intense blue and red patterns – effectively local hills and valleys in the sea surface. These are associated with the strong western boundary currents of the Gulf Stream in the North Atlantic, the Brazil current confluence with the Falklands current in the southeast Atlantic, the Benguela current off South Africa and the Kurishio current east of Japan.

The Sentinel-3A radar altimeter will also measure significant wave height and provide estimates of surface wind speeds over the ocean, which is important information for ocean and wave forecasting systems operated by the Copernicus Marine Environmental Monitoring Service.