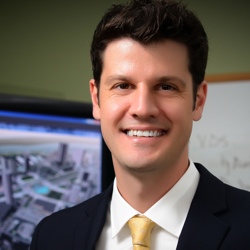 GameSim is a Florida-based company that continues to grow rapidly as a provider of software products and services, with a specific interest in GIS visualization software. Sensors & Systems (S&S) editor Matt Ball spoke with Andrew Tosh, founder and president of GameSim, about the company’s strong growth, and unique positioning between the gaming world and geospatial technologies.

S&S: Your company has a very unique perspective, with development work in both gaming and GIS. Do these technologies and disciplines fit well together?

In particular, the reason we deal with GIS so much with military simulations is that they’re wanting to put real-world environments into training simulators, such as helicopter trainers. We start with a lot of raw GIS data, and then we’ll take that data and process it in a procedural way in order to generate a pretty 3D visual that you can put into a training system. So, we ended up creating tools, like Conform, that revolve around being able to take a large amount of raw GIS data, and process it, creating visualization in two and three dimensions with fly-throughs of that data really rapidly. Conform is a geospatial and simulation data interactive visualization tool, offering a variety of unique abilities, including an instantaneous view of raw geospatial source data.

S&S: Who are the typical users of your Conform tool?

Tosh: One of our biggest customers for Conform is the U.S. Army who take a lot of raw GIS data and then convert it into 3D visuals. They really like Conform, because they have a lengthy pipeline, from taking that raw GIS data and getting it to a final format that can be used by simulators, such as flight simulators. With Conform, they’re able to look at all that raw data in near real-time to see what problems they have with the data before they start that entire pipeline. That is its strongest use case right now, and we’re seeing a lot of other potential customers that are interested in a similar tool set.

Tosh: Absolutely. It seems like a big thing going on right now in the industry is this whole notion of fusion, where you bring a lot of different data sources together. They may be coming from LIDAR or satellite imagery or what have you. We focus on having a way that you can bring all the data into a common environment to get a better sense of what your content really is. It provides a unified way to see correlation problems between imagery, LIDAR data, and other data. Having a tool that you can bring all those into a common environment is really important for customers that need to understand their content.

S&S: Is the fusion capability also useful for detecting change?

Tosh: Absolutely. Some people use it that way, where you can bring in multiple images and other content and then it has some tools where you can adjust the translucency between different layers to see the differences. It can be useful in that way to detect changed conditions of the environment.

S&S: Are there bi-directional flows of information, say you’re making mark-ups or you’re doing some things within the dataset, can you pass that back to a GIS system?

Tosh: Conform has editing capabilities, i.e. you can make changes and save those changes back out. Additionally, we have created program specific collaborative features for the U.S. Army. In a big collaborative environment, we’ll get a lot of GIS analysts that are all looking at the same data, you can mark the areas up and add notes and comments and share those with the entire team that’s working on that content.

S&S: Is this being used right now for city-size datasets? I’m trying to understand the context of this data being created in this collaborative fashion around military scenarios.

Tosh: It’s being used for the areas of the world that the military are interested in. They’re dealing with a lot of content.

We work a lot with the gaming industry, and in the past that industry had been less interested in these procedural capabilities, because they’ll have artists on staff that can manually build the gaming environments. The military on the other hand can’t use artists to manually construct a pretty 3D environment for an entire country.

Those final formats are actually now becoming the things that you would put into a commercial game engine such as Unreal, CryENGINE or Unity. The military is starting to use a lot of these engines for making their military simulators. Now, we’re really focused with Conform exporting out environments into those game engine systems.

S&S: I have heard of game engines for LIDAR visualization and big city visualization. Does the speed of rendering blowing away what can be rendered in a CAD, BIM or even a GIS system?

Tosh: There are a lot of great game engines out there, Unity being one of them, that can, for a fairly low cost, create pretty advanced situational awareness applications. We’re trying to bridge the gap that exists to take raw GIS content and get it into those systems.

S&S: Do you see use in the infrastructure space, or smart city space, where there’s an interest to visualize an urban core in great detail?

Tosh: I think that’s one of those things that we’re excited to learn about by going to GEOINT, a geospatial intelligence conference, coming up in Tampa in April. We have an exhibit there to show off Conform to the community. We’ll be showing it as not just a tool for the fusion of data, but as a platform that can be extended. We want to show the basic capability that it has, show how we can extend it for particular customer needs, and talk about how we’ve done that for other customers.

S&S: How did the development of this tool come about? Was it created to serve internal needs for a project, and then productized?

Tosh: Initially it was an internal tool that we were using. We do a lot of game development as well, so we have a contract from CSX, which is a freight-train company. They had actually contracted us to make an educational game for them, which we did and it’s out there now. As part of that game, though, they were really interested if we could make fairly realistic environments.

In order to reduce costs of generating the environments that we were putting into that educational game for CSX, we ended up creating Conform with an awareness of what was going on in the military. As that project got a little bit further along, we started showing it to some of our Department of Defense customers.

We continued developing Conform to the point it was polished enough to sell. The Army was one of the first customers for it. After they licensed it, they paid us to create some custom plug-ins for it as well. We decided to open-source all of those plug-ins, and we’re trying to do more of that. As we develop more custom capabilities for Conform, we plan to open source it to create a community of interested developers that can extend the tool.

Tosh: I think so. A key design goal of Conform has been to have a plug-in interface and a software development kit to create your own. Creating a number of plug-ins and putting them out there for open source will, hopefully, help jump-start more custom plug-ins being created by others.

We had a customer that was interested in creating a plug-in for Conform that could do a simulation based upon traffic patterns. They wanted to be able to simulate a natural disaster or a terrorist event and to see where the traffic would move, and then they could make changes to that and see in real-time how the traffic would go. There are a lot of traffic simulators out there that they were going to use and integrate into Conform. That’s the story we plan to try to tell at GeoInt, how Conform can be used as that base platform to add simulations or scenario-planning or any training application on top of it.