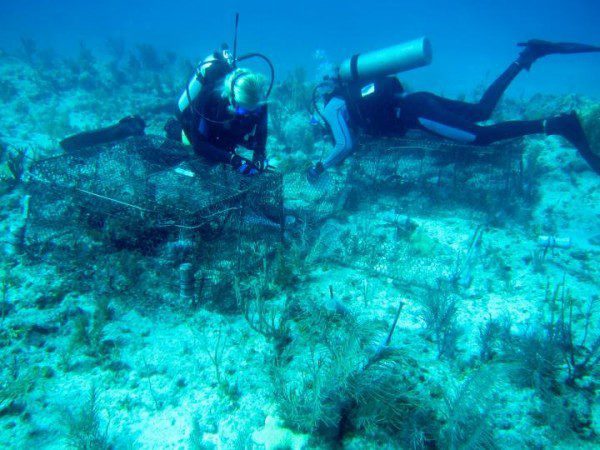 HOUSTON, June 7, 2016—One of the longest and largest studies of coral reef health ever undertaken finds that corals are declining worldwide because a variety of threats — overfishing, nutrient pollution and pathogenic disease — that ultimately become deadly in the face of higher ocean temperatures.

The study by marine biologists from Rice University, Oregon State University and other institutions was published today in Nature Communications on the eve of World Oceans Day, an annual global celebration of Earth’s oceans. The findings are based on a continuous three-year experiment to measure how humans impact reef health. Data from the experiment on reefs in the Florida Keys suggests that widespread coral deaths, including the ongoing global bleaching event that affected 90 percent of the Great Barrier Reef this year, are being caused by a combination of multiple local stressors and global warming.

“Our findings serve as a challenge and an inspiration for World Oceans Day because they show that what we do locally impacts the ability of coral reefs to survive global stressors,” said study co-author Adrienne Simoes Correa, a marine biologist in Rice University’s Department of BioSciences. “If we catch too many reef fish and allow human waste, detergents and fertilizers to enter the ocean through runoff and river outlets, then it is even harder for corals to cope with warming seas driven by climate change. We can see the devastating results of these combined stressors around the world currently, as reefs bleach and corals die in the wake of the ongoing third global coral bleaching event.”

Researchers found the combination of warming and other stressors greatly weaken corals and allow opportunistic pathogens to build to such levels that corals cannot survive.

The findings were made by researchers from six institutions following an experiment that simulated both overfishing and nutrient pollution on a Florida reef. A large body of field data collected over an extended period of time helped resolve fundamental questions about the cause of coral reef declines, scientists said.

“This is grim news, but at least it will help settle the argument over why corals are dying,” said Rebecca Vega Thurber, an assistant professor in the College of Science at Oregon State University and corresponding author on the study.

“This makes it clear there’s no single force that’s causing such widespread coral deaths,” she said. “Loss of fish that help remove algae, or the addition of excess nutrients like those in fertilizers, can cause algal growth on reefs. This changes the normal microbiota of corals to become more pathogenic, and all of these problems reach critical levels as ocean temperatures warm.”

The end result, the scientists said, is a global decline of coral reefs that is now reaching catastrophic proportions.

“We need to know how human activities are affecting coral reef ecosystems,” said David Garrison, program director in the National Science Foundation’s Division of Ocean Sciences, which funded the research. “Coral reefs are among the most sensitive indicators of the health of the oceans. This report is a major contribution toward understanding how reefs will fare in the future.”

Correa said few studies rival the scale and scope of the one in Florida.

“It is incredibly difficult to keep an experiment running continuously for three years on the reef,” she said. “To simulate overfishing effects, we put large cages over parts of the reef to keep fish out. It was a constant battle to make sure these cages were really ‘fish-proof’ and to keep macroalgae, fire corals and other organisms from growing on top of the cages. Every time a storm or hurricane blew through, there was a risk that the cages would be damaged or destroyed. Despite the challenges, field studies like this one are important because they show how coral reefs are suffering from ‘death by a thousand cuts.'”

Scientists have said the problems caused by bacterial infections due to local stressors and warm temperatures are in addition to damage from mass coral bleaching events already under way. Only in the early 1980s did researchers observe the first mass-bleaching event in recorded history. There have now been three such events just in the past 20 years.

Among the findings from the study:

• Overfishing, nutrient pollution and increased temperature all lead to an increase in pathogens.
• The sheer abundance of pathogens is more important than what particular type or species they are.
• Coral reef mortality mirrors the abundance of pathogens.
• Heat exacerbates these problems, with 80 percent of coral deaths coming in the summer or fall, but only when fish are removed or nutrient pollution is present.
• While high thermal stress has received the most attention, even modest temperature increases make corals more vulnerable to bacteria.
• Loss of fish can increase algal cover up to six times.
• In a distressed system with many algae, coral disease levels double and coral mortality increases eight times.
• Increased algal cover or elevated temperature can reduce levels of naturally secreted antibiotics that help protect corals from harmful bacteria.
• Direct algal contact driven by overfishing and nutrient pollution destabilizes the coral microbiome, in some cases leading to a six- to nine-time increase in mortality.

According to the researchers, the findings make it clear that in the face of global warming, some of the best opportunities to protect coral reefs lie in careful management of fishing and protection of water quality. This would give corals their best chance to have a healthy microbiome and resist warmer conditions without dying.