The U.S. Environmental Protection Agency (EPA) is recognizing its 2013 WaterSense Partners of the Year, including two partners who received the first-ever WaterSense Sustained Excellence awards in recognition of their continuous high level of support. The Partner of the Year awards program recognizes the commitment of WaterSense partners in promoting water efficiency to the American

Study Puts Freshwater Biodiversity on the Map for Planners and Policymakers

When it comes to economic growth and environmental impacts, it can seem like Newton’s third law of motion is the rule — for every action, there is an equal and opposite reaction — and that in most cases, the economy prospers and the environment suffers.

The Santa Cruz River watershed, located on the Arizona-Sonora portion of the U.S.-Mexico border, depends for its perennial flow on an international treatment plant that treats wastewater on both sides of the border before discharging it into the river in Arizona. This treated wastewater has great value for nearby wildlife and ecosystem managers, property owners 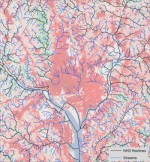 Where a stream ends is clear, but where it begins can be more difficult to discern. Researchers from the University of Maryland Center for Environmental Science have developed a new method to solve this problem, resulting in a new map of the Potomac River watershed stream network that significantly improves the information needed for assessing

The USGS has developed a tiered chemical prioritization approach that can be used by local, state, and federal agencies to develop ambient water and sediment quality monitoring strategies. Over 2,450 chemicals were prioritized based on their likelihood of adverse effects on human health or aquatic life, combined with information on likelihood of environmental occurrence.

Workshop on Remote Sensing and Eco-Hydrology in Arid Regions

The Sultanate, represented by the Ministry of Regional Municipalities and Water Resources (MRMWR), will participate tomorrow (Monday) in the international workshop on “Remote Sensing and Eco-Hydrology in Arid Regions” and the meeting of the regional networks of the international network for the hydrology of the arid regions (G-WADI), to be held in Beijing, China.

Every Drop Counts: Progress Toward a National Water Census

Today the U.S. Geological Survey led a congressional briefing featuring state and regional water stakeholders who spoke about vital uses of comprehensive water information that would be met by the National Water Census called for by the SECURE Water Act of 2009.

A new computer model of the Chimacum Creek Basin built to simulate “what-if” scenarios for basin groundwater managers indicates that most of the water recharging the groundwater system flows directly out to marine waters and coastal areas, according to a report by the U.S. Geological Survey.

Assessing the Gaps in Streamflow Information