How often have you wondered “are they getting it?” Are the data and maps making any sense to the students? What are they thinking? You are not alone. Many teachers have pondered the same questions. ‘Understanding Place – GIS Mapping across the Curriculum‘ provides a glimpse into the minds of students, through the eyes and 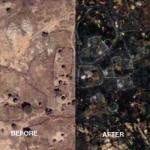 Amnesty International recently launched Eyes on Darfur, an innovative and powerful website utilizing photographs and high-resolution satellite imagery to communicate the crisis in the Darfur region of Sudan. The satellite images track human rights violations before and after reported attacks, highlighting changes in homes and vegetation in villages throughout the region. While the images only

The Tempus program stands for “changes in higher education through people to people cooperation”. The program funds cooperation projects in the areas of curriculum development and innovation, teacher training, university management, and structural reforms in higher education. It also facilitates mutual learning between regions and peoples and understanding between cultures by putting special emphasis on

NERVE visual map For many years individual regional organisations have independently created and maintained models of their areas of responsibility in order to support their core activities. Over 90% of data for organisations such as utilities, local government, emergency services and other regional agencies relates to a spatial location, and geographic information systems are now

About 1200 participants from all over the world gathered in Moskau, Russia recently to celebrate the ICA’s 23rd International Cartography Congress (ICC). Countries from all over the world were represented, most of them members of the International Cartographic Association. A rough estimate would divide the participants into four cultural groups of equal size; ‘the Western’, ‘Russia and

Advances in technology today are enabling new companies to participant in areas that were previously only reserved for large companies. Labour shortages are also compounding issues, particularly for civil engineering companies, who are facing growing problems in maintaining skilled staff, particularly those who know how to operate and apply the latest software tools. The result

With an estimated 600 in attendance from all parts of the UK, the Annual Gala Awards and Dinner were held at the Grosvenor House in London this week. This event, was chosen as the premiere event for the construction industry in the UK by the Prime Minister in 2001 and is a showcase for British

For the past 10 years, many GIS users throughout the Oregon State GIS community have utilized imagery datasets for their mapping needs. For statewide imagery coverage of any reasonable resolution this has required the arduous task of moving the data set via CD/DVD, portable hard disks as well as through the use of FTP sites.

I had the opportunity to interview three prominent people in the UK geoinformation community while at the Association for Geographic Information (AGi) conference in Stratford-Upon-Avon. Vanessa Lawrence is Director General and Chief Executive Officer of the British Ordnance Survey,  Andy Coote is Consultancy Services Director for ESRI (UK) and  Ed Parsons is Geospatial Technologist for Google.

The 2007 InterGeo event in Leipzig this week was well attended with estimates approaching 15,000 people from more than 80 different countries. This event provides a unique perspective as it combines on one tradeshow floor all of the disciplines that create, manage, analyze, display and distribute geospatial data. It includes both manufacturers and suppliers, and