The 2008 GeoWeb Conference took place in Vancouver, BC, Canada from July  21-25. This growing event attracts an international audience of developers and technical managers with its strong focus on the underpinnings of the GeoWeb that has continued on from its start as GML Days.

From The Survey To The Map

Cicilia Friberg and Per Olsson work as surveyors for the Stenungsunds community in Sweden. In only 50 years Stenungsund has changed from a quiet summer resort into a regional business centre. The population today is four times what it used to be. With this constant expansion it is up to the local surveying department to 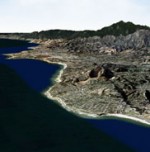 Elevation is a critical component of any earth observation, and elevation data is frequently used for a wide variety of applications. Until recently, however, the available large-scale elevation datasets lacked precision and were outdated – some of the most-used data was more than 50 years old. Intermap Technologies, one of the companies most actively exploring

INSPIRE – Where Is The End-User?

As the INSPIRE (INfrastructure for SPatial InfoRmation in Europe) Directive proceeds, Lars Brodersen wonders where the end-user fits into the process. “And THEN! Then …, yes, what then? What is INSPIRE actually? Who is gaining what by INSPIRE’s implementation?”

AGIT / GI Forum 2008 is a major international symposia and exhibit held yearly in Austria at the University of Salzburg. It not only offers a successful dual Deutsche-English language format, but it manages to combine industry, government and education authorities into one action packed, three day program together with an exhibition. New technologies and

The annual Association for Geographic Information (AGI – UK) Conference  will take place during September 2008. V1 Magazine interviewed Conference Chairman, Steven Feldman prior to the event to gain an understanding about this year’s event and what the GI community can expect from the event.

The Constitution of the United States requires a census to be taken regularly to determine congressional apportionment, Electoral College voting and government funding. With the information gathered, the Census Bureau seeks to be the leading source of quality data about the nation’s people and economy, and the need to understand and geospatially represent the growing

How To Introduce Multiple Scales and Time into Natural Resource Data Management?

Two of the fundamental questions natural resource managers should pose to themselves from time to time are: “What is it that is being managed and over what time frame?”. In this article I will delve into these questions using the boreal forest as an example and consider the consequences of the answers for natural resource

The Free State of Saxony in Germany has been developing a forest management system that has evolved into the Saxon Forest Geographical Information System (FGIS). The system not only supports forestry but it integrates tightly into the wider Saxony Spatial Data Infrastructure (SDI). Both government agencies and citizens can access the system, sharing information and