Bentley Systems returned to Amsterdam last week for their annual invitation-only Be Inspired thought leadership and award ceremony. There were 280 nominations from 42 countries for this year’s awards, and from these there were 57 finalists presenting at the event. Among the infrastructure categories represented were 3-D City GIS, construction simulation, energy modeling, infrastructure asset operations, road and rail, and bridges. Throughout, the company displayed their unique vision of geospatial technology woven and integrated throughout their product line, as well as the critical importance of the geospatial perspective to realize intelligent infrastructure.

Leading off the event was a presentation from Bentley Systems CEO Greg Bentley, with metrics and insight into the overall global infrastructure market. The company has seen tremendous growth from the BRIC ((Brazil, India, China, Russia) countries with the growth there ten times the pace of the rest of the world. Through the company’s metrics on software utilization, they see that Asia hasn’t had much of a downturn, and that the North American and European markets are on the right track for recovery. However, given the government cost cutting in these markets civil and public work projects don’t look like they will be sustained at the same level.

Tying into Bentley’s tagline of ‘Sustaining Infrastructure’, Greg Bentley asserted that sustaining infrastructure sustains our economies and the environment, and that we can do both at once. The company has focused on the integration of design and simulation with these goals in mind, aiming to increase the efficiency and improve the performance of our buildings and infrastructure in order to drive down their impacts on our planet.

Bentley took the opportunity of the event to launch a new line of bundled products and services called AECOSim. This product line includes the Building Designer, Energy Simulator and Compliance Manager service. The AECOSim Building Designer allows for design, structural engineering, lighting analyis, mechanical and electrical workflows from all within the same product. The many different processes can be modeled and controlled from one system within an integrated model, with simulation tools provided for different disciplines.

With the AECOsim Energy Simulator, designers can run energy simulation on the model and try different system types. Detailed analysis by zones and rooms, with information on building use, glazing and infiltration, provide a multi-parameter feedback on the performance of the design. This new level of control on designing for performance throughout the year, led Bentley to coin the term ‘optioneering’, to describe this wholly-new approach to design with simulated performance outcomes driving design options. With Bentley’s AECOSIM Compliance Manager offered as Software as a Service, users can extract details from both the Building Designer and Energy Modeler in order to report and keep track for LEED and other green building requirements from around the world, greatly simplifying the calculation and documentation for accreditation.

Greg Bentley discusses the next wave of digital city modeling as the “Semantic City,” where connections and interactions between systems accomplishes better continuity and better performance. According to Bentley, progression has occurred from GIS mapping in the 1980s to geospatial modeling in the 2000s to semantic simulation in 2010s. Sensors are an important component of this transition as their real-time readings and ongoing inputs provide an important transition for our systems. With these inputs we can finely tune our models to achieve predictive simulations that accurately portrays true performance.

The semantic city brings together Bentley’s 3D City Modeling capabilities with Bentley’s considerable simulation and analysis capability that is perhaps best illustrated at a city scale with their Darwin water leak modeling tools. Darwin helps a city to understand where leaks are happening by combining detailed modeling with analytical simulation that looks at performance discrepancies to determine the source of leaks. The  modeling and simulation of individual systems, and soon systems of systems, will result in greater performance of our infrastructure for a more efficient future. 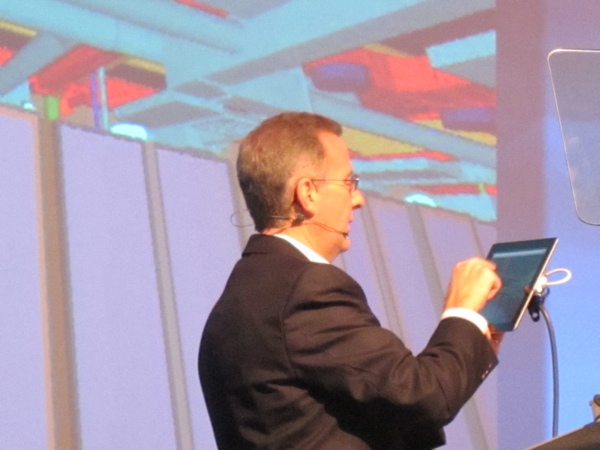 Two iPad applications for model navigation and access to details in the field, were displayed at the event. Bentley Navigator and ProjectWise Explorer are both optimized for navigation, and to do walk-throughts with the details in the model following your gaze or move. The new functionality approaches augmented reality, and makes it much easier to understand the design in context.

The iPad applications tie into Bentley’s vision of ProjectWise and Assetwise as centralized places for information exchange. Throughout the event, ‘information mobility’ was a recurring theme to discuss the need for information access regardless of discipline, device or your physical location. The iPad apps are a wonderful display of this concept, and the capabilities of the device have been well tailored to meet the needs of infrastructure professionals in the field.

Bentley Systems announced the acquisition of Pointools, a hardware-neutral point cloud handling software, at the event. The point cloud creation hardware is reducing in cost, and becoming more integral to infrastructure projects. To date, the size of point clouds has made them problematic because they overwhelm storage and query capabilities. The latest breakthrough tackles the ‘big data’ challenge with the ability to stream point clouds on demand.

Bentley will manage point clouds in ProjectWise, with ability to stream just the part of the point cloud that you’re interested in working with. The point cloud then becomes an integral part of workflows, without the traditionally slow handling times. The streaming in a separate thread means you can zoom and pan and move around in your drawing space as the details of the point cloud is being generated. The improved point cloud modelling will prove most helpful with reality capture for retrofits.

All of these technological advancements, and market updates, took place in the context of Bentley’s customer presentations from a wide variety of scales, and in a number of critical infrastructure contexts. Among the important presentations, although not necessarily the award winners, were:

Throughout all presentations, and worthy projects, the use of Bentley products were emphasized. These projects provided a striking reminder of how important infrastructure is to our daily lives, and how infrastructure projects that are run right, have the greatest impact.

The Be Inspired 2011 infrastructure thought leadership event and award ceremony marked Bentley’s continued progression toward enabling greater collaboration and integrated design that incorporates a high degree of modeling and simulation. The company’s product offering continues to focus on both mobility of information as well as the benefits of simulation for greater insight. Central to this vision, and the success of projects, is the tight management of project workflows that Bentley addresses with their ProjectWise and AssetWise products. The event was a credit to the company’s consistent vision and delivery of meaningful functionality to their users, and the caliber of projects and presentations speaks to the stature of the tools.