Lima, Peru —More than a dozen institutions signed the historic Joint Statement for the Amazon Waters today at the Amazon Waters International Conference in Lima, marking an unprecedented commitment to collaboration in efforts to promote the integrity of the Amazon Basin, home to the largest continuous rainforest and most extensive freshwater ecosystem in the world.

STILLWATER, OK, June 13, 2016—SST Software, a leader in agricultural geospatial technology, has announced the launch of Sirrus for iPhone for added in-field mobility and convenience. “Communication, accessibility and convenience are important to the precision ag community,” said Drew McMahon, Product Manager for Sirrus. “Increased mobility with Sirrus for iPhone gives our users a tool that

For the first time, an instrument onboard an orbiting spacecraft has measured the methane emissions from a single, specific leaking facility on Earth’s surface. The observation — by the Hyperion spectrometer on NASA’s Earth Observing-1 (EO-1) — is an important breakthrough in our ability to eventually measure and monitor emissions of this potent greenhouse gas

One-third of Europe’s countryside is potentially affected by noise pollution caused by human activity, according to a new report published today by the European Environment Agency (EEA). Protecting areas not yet affected by noise can bring significant environmental and health benefits, the report says. 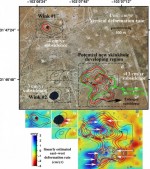 Residents of Wink and neighboring Kermit have grown accustomed to the two giant sinkholes that sit between their small West Texas towns. But now radar images taken of the sinkholes by an orbiting space satellite reveal big changes may be on the horizon. A new study by geophysicists at Southern Methodist University, Dallas, finds the

San Francisco, Calif., June 14, 2016—SmarterBetterCities extends offerings  to support Smarter Campuses with quick start services and cloud-based products. Institutions have hundreds of buildings, with new ones being built yearly. To better manage their assets, many institutions are turning to 3D to help visualize their interior and exterior spaces. With CloudCities 3D models of campuses

Robert Moucha, assistant professor of geophysics, and Gregory Ruetenik, a Ph.D. student in Earth sciences, have collaborated with Gregory Hoke, associate professor of Earth sciences, on a unique numerical modeling study that simulates changing terrain over millions of years. Their study shows that moderate changes in dynamic topography produce an erosional response in the form