PROVIDENCE, R.I. [Brown University]—Agricultural expansion is quickly chewing up native vegetation in the vast wooded savannas of Brazil’s Cerrado biome, and a new study shows that those changes in land use are altering the region’s water cycle.

“We’ve shown that cropland recycles less water annually back into the atmosphere than native Cerrado vegetation,” said Stephanie Spera, a graduate student at Brown University in the department of Earth, Environmental and Planetary Science and a researcher at the Institute at Brown for Environment and Society (IBES). “As agriculture continues to expand, that could affect the rainfall regime that supports both natural vegetation and agricultural production.”

The study, which Spera led along with researchers from the University of Vermont and the Woods Hole Research Center, is published in the journal Global Change Biology. 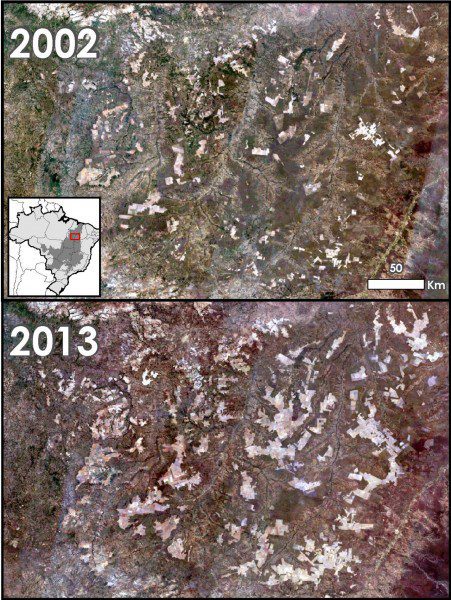 While the Brazilian Amazon has been the focus of intense conservation efforts, the neighboring Cerrado has received much less attention, Spera said. As a result, deforestation to make room for cropland has increased in the Cerrado, even as it has slowed significantly in the Amazon.

Spera and her colleagues used a decade’s worth of satellite data to document those land use changes in a Cerrado region called Matopiba, where a bulk of recent agricultural expansion has taken place. The data showed that agricultural land more than doubled in area, from 1.3 million hectares in 2003 to 2.5 million hectares in 2013, within the 45 million-hectare study area. Nearly three quarters of that expansion happened on land that had been host to intact native Cerrado vegetation.

The researchers also used the satellite data to estimate the region’s rate of evapotranspiration — the amount of water escaping soil and plant leaves that is recycled back into the atmosphere. The data showed that during the growing season, cropland recycles as much or slightly more water than native vegetation. But during the dry season, when the fields are fallow, evapotranspiration from agricultural land was an average of 60 percent lower than from native vegetation.

As cropland continues to expand at the expense of Cerrado vegetation, the decrease in dry season water recycling could eventually impact the region’s critical rainy season, which is responsible for the lion’s share of Cerrado rains. “Modeling studies have shown that alteration of the regional water cycle during the dry season could affect both the timing and stability of the rainy season,” Spera said.

That has implications for both the natural vegetation and the continued viability of the region for agricultural production.

“Timing of rains is a big deal,” said Jack Mustard, a professor of earth, environmental and planetary sciences at Brown and co-author on the study. “This is nearly all rain-fed agriculture in this region. If you start delaying the onset of the rainfall, that has implications for what you can grow.”

But the impacts aren’t necessarily confined to the Cerrado. Prevailing winds carry Cerrado air masses westward toward the Amazon, and the moisture within them contributes to rainfall there as well.

“Half of the rainfall in the Amazon is recycled water,” Spera said. “So a decrease in moisture in those air masses could cause a decrease in rainfall.”

The study also, however, identified a potential mitigating factor to the overall decrease in water recycling: double cropping.

Double cropping is the planting of two crops in the same field in a single growing season. The study showed that, in terms of annual evapotranspiration, double-cropped land behaves more similarly to native vegetation. That’s because double cropping effectively increases the length of the active growing season — the period during which cropland evapotranspiration rivals that of native vegetation.

Double cropping increased from just 2 percent of cropland in 2003 to more than 26 percent in 2013. Without that increase in double cropping, the reduction of water recycling in croplands would have been as much as 25 percent worse, the study showed.

The researchers suggest that policies that encourage double cropping could help to blunt the effect of agricultural expansion on the Cerrado water cycle.

Other authors on the study were Gillian Galford (University of Vermont), Michael Coe (Woods Hole) and Marcia N. Macedo (Woods Hole). The work was funded by the NASA Land-Cover/Land-Use Change Program (NNX11AH91G and NNX11AE56G), a NASA Terrestrial Ecology grant (NNX12AK11G), and the Gordon and Betty Moore Foundation and a IBES fellowship.