February 6th, 2010
The Need to Monitor the Performance of GNSS 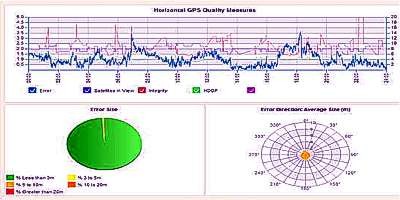 Global Navigation Satellite Systems (GNSS) technologies are now universally regarded as critical elements within modern transport, energy and communications infrastructures. However, GNSS is also vulnerable to faults and failures at system, signal and service levels which can severely impact the service and degrade performance.

Introduction
Global Navigation Satellite Systems (GNSS) provide all weather, 24 hour a day, global coverage for determining position, velocity and time information for a wide variety of different business, consumer and government-related applications. There are currently two core GNSS systems, the US Global Positioning System (GPS) and the Russian equivalent GLONASS (although GLONASS is not presently a complete system). GNSS technologies are now universally regarded as critical elements within modern transport, energy and communications infrastructures. However, GNSS is also vulnerable to faults and failures at system, signal and service levels which can severely impact the service and degrade performance.

With the growing dependence on GNSS technology there have been several studies to address the impact on loss of capability in terms of impact on safety, security and commerce, most notably the Volpe Report in the United States and the OFCOM study in the UK. The OFCOM study investigated the impact on capability to UK commercial and domestic services from a loss of the GPS signals. This work highlighted the growing reliance on GPS in the UK for fundamental activities and recommended that a “more permanent and robust mechanism for notification of GPS signal information is developed”.

The purpose of this short paper is to outline the potential faults and failures that could occur within GNSS and the measures that may be implemented to guard against or detect such occurrences. Through the description of a GNSS monitoring service, the nominal quality of GNSS positioning is presented.

Categories of GNSS faults and failures
Positioning with GNSS is based on the reception and processing of timing codes modulated onto signals which are broadcast from the satellites. However, GNSS positioning is complex and is prone to system wide and localised errors. There is potential for failures and errors to occur at all stages from message generation and uplinking to the satellite, to broadcast and signal propagation, through to reception and processing at the receiver.

The following list provides an overview of the potential failure modes of GNSS. They have been categorised into system failures and navigation failures. System failures can be thought those that are due to problems in the GNSS ground and space system, up to the point at which the signal is transmitted from the satellite. Navigation errors are environment effects or receiver failures.

There are examples of failure events occurring plus many more failure modes that have been identified but have so far not occurred. Unfortunately, existing systems (eg GPS) were not designed to possess a sophisticated monitoring capability and, as a result, system failures can accumulate over long periods before detection by a ground monitor and annunciation.

The following incidents are examples of some observed GPS failures:


Protecting against Faults and Failures
There are various different methods to protect against failures, containing infrastructure and/or mathematical algorithms. Differential systems compare GNSS observations and positions against expected and known values to determine measurement and positional errors. In the case of wide area differential systems, these are decomposed into satellite orbit, clock and atmospheric components.

The most well known of these are Space Based Augmentation Systems (SBAS), such as the European Geostationary Navigation Overlay System (EGNOS) that have been developed for the aviation community and are used within commercial air transport and general aviation. As well as delivering the decomposed errors to users, they also deliver a warning flag when the system becomes unsuitable for the particular applications.

This integrity flag must be delivered within a certain time window of the fault having occurred, the so-called time to alert. SBAS systems use geostationary satellites to deliver the messages and can only be used by suitably equipped GNSS receivers. Differential GNSS is the maritime equivalent developed for regulated navigation and surveillance applications around coastal waters. This transmits different messages to SBAS and uses medium frequency radio broadcast. Again, a suitably equipped GNSS receiver is required.

The most famous mathematical mechanism is the RAIM method, which is based on the redundancy of available measurements provided by all the visible satellites. RAIM protects the user by computing a test statistic, based on the residuals obtained when solving navigation equations on alternative measurement sets and comparing it to a threshold, which is set according to the requirements.

An alarm is sent to the user whenever the test statistic exceeds the threshold. Moreover, RAIM generally derives a protection level on the basis of the assumption that the satellite with the highest impact on the positioning accuracy (i.e.: which potentially causes largest error) has failed, what is called up as ‘worst-case satellite assumption’.

Monitoring GNSS Performance
The preceding section provided a very brief summary of the various options for improving GNSS positioning in terms of the accuracy and assurance of applicability for a particular task, ie the integrity or reliability.

However, within the majority of today’s GNSS applications these techniques are not available in terms of signal availability, signal demodulation capability, or the ability to implement enhanced algorithms within the position solution. GNSS is regarded as a sensor implemented within a piece of equipment, for instance a smartphone or a vehicle based on board unit used within electronic fee collection schemes.

These GNSS devices provide little information on the quality of their position, velocity and time results other than the number of satellites used within the solution and a measure of the strength of the geometry of those satellites (the dilution of precision, or DOP, figures).

To address this, NSL have been monitoring the performance of GNSS at different sites across the world through the use of a bespoke tool called GISMO, the GNSS Signal Monitoring Observatory. The concept behind GISMO is summarised in the figure below, with the main features being: The GISMO data analysis tool determines the errors in the ranges recorded to GNSS satellites at all recorded epochs, the position errors at each monitoring station and the integrity, or accuracy guarantee, at each monitoring station. Through use of advanced algorithms and models, the errors are segregated into the following different contributions:

These component errors can subsequently be used to determine the position errors at each monitoring station that would occur with different GNSS receiver configurations. For instance, for some GNSS receivers, the positioning engine uses standard algorithms to model and remove the ionospheric and/or tropospheric refraction, whilst some will not utilise atmospheric models, Figure 2: GPS Accuracy at a Single Site throughout 2009.

instead leaving the user to improve the position by techniques such as differential GNSS. GISMO is a commercial service and can be tailored for a particular client through the type of receiver used, the distribution of the network and the types of output required, whether that be quarterly reports or a continuous web-hosted service.

So how good is current day GPS?
The short answer is “very good”. The GPS Performance Standards for the Standard Positioning Service (SPS) specify the average global horizontal accuracy of 13m 95% of the time.

Figure 2 shows the accuracy determined at a single station within the UK for the whole of 2009 derived from approximately one million position solutions showing an accuracy of around 2.5m. This is for single frequency pseudorange positioning, however using a professional grade receiver located at a static site with good “open sky” visibility.

The 99.9% accuracy is at 6.57m, but the 99.99% accuracy is at several kilometres. In other words, within this dataset there will be approximately 100 instances when the error is greater than one kilometre, although there has been no further analysis on the cause of these errors.

Figure 3 is a screenshot from the GNSS Assurance website (www.gnssassurance.org). This acts as a web based interface to the GISMO tool implemented for a number of GNSS reference sites around northern Europe.

The analysis shows position error, RAIM integrity and the other measures typically output by GNSS receivers, satellites in view and Horizontal DOP.

The readers are invited to access this site which hosts analysis going back to June 2008. Another site of interest is (www.gnssmonitoring.org) which provides a more descriptive overview of GNSS quality and, for one site, listing daily summary statistics and the performance during the current day. What about the future?
Throughout this paper the term GNSS has been used rather than GPS. GNSS is now entering into a period of intense change which will impact on these applications and on their users. For many years, GPS and GLONASS existed as the only systems, however all is set to change with the advent of new global and regional systems, augmentation services and test satellites. Furthermore, GPS and GLONASS are also going through their own phases of modernisation with the GPS III programme and the GLONASS M and K programmes.

Over the next 5 – 10 years, Galileo and Beidou/Compass shall become fully operational systems, joining GPS and GLONASS in broadcasting new signals with modern modulations and innovative services. At a regional level, both India and Japan are moving ahead at pace with their IRNSS (Indian Regional Navigation System) and QZSS (Quazi Zenith Satellite System) programmes respectively. QZSS is now entering its integration and test phase.

Both IRNSS and QZSS are also proposing new signals and services. Bringing this all together, there is the potential to be 120 navigation satellites in orbit, with approximately 40 being available to users at any one time, all transmitting signals on at least two frequencies.

NSL believe that monitoring tools, such as GISMO, will continue to grow in importance as governments become increasingly dependent on GNSS technology to implement new policies. For example, in the UK, GNSS is already being considered for use in civil aviation, precision navigation, train control, road user charging, offender tracking and hazardous cargo monitoring. The GNSS performance statistics can also be used to support claims against service availability or of failure in the event of accidents or incidents.